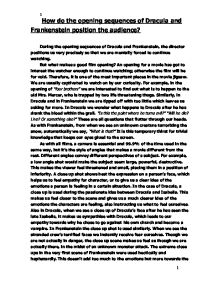 How do the opening sequences of Dracula and Frankenstein position the audience?

How do the opening sequences of Dracula and Frankenstein position the audience? During the opening sequences of Dracula and Frankenstein, the director positions us very precisely so that we are mentally forced to continue watching. But what makes a good film opening? An opening for a movie has got to interest the watcher enough to continue watching; otherwise the film will be for void. Therefore, it is one of the most important pieces in the movie jigsaw. We are usually captivated to watch on by our curiosity. For example, in the opening of "four brothers" we are interested to find out what is to happen to the old Mrs. Mercer, who is trapped by two life threatening thugs. Similarly, in Dracula and in Frankenstein we are tipped off with too little which leaves us asking for more. In Dracula we wonder what happens to Dracula after he has drank the blood within the grail. "Is this the point where he turns evil?" "Will he die? Live? Or something else?" These are all questions that flutter through our heads. As with Frankenstein, from when we see an unknown creature terrorizing the snow, automatically we say, "What is that?" It is this temporary thirst for trivial knowledge that keeps our eyes glued to the screen. As with all films, a camera is essential and 99.9% of the time used in the same way, but it's the style of angles that makes a movie different from the rest. Different angles convey different perspectives of a subject. For example, a low angle shot would make the subject seem large, powerful, destructive. This makes the viewer feel threatened and small, placing them in a position of inferiority. A close up shot shows best the expression on a person's face, which helps us to feel empathy for character, or to give us a clear idea of the emotions a person is feeling in a certain situation. ...read more.

The director realises that the audience knows these facts and uses it to his advantage; this makes them have a tiny thought in their mind that the story may be true and that it could even happen to them. In Frankenstein, the crewmates are deathly frightened when the unknown creature comes to attack them. As I stated before, humans are naturally afraid of the unknown. Clearly the director is aware of this, as the crewmates begin to run with their eyes wide open, mouths agape. They also clamber together in a huddle, trying to get as close to each other yet furthest away from the creature as they can. This is another human reflex which is commonly associated with the phrase, "there's safety in numbers". The director knew that there is safety in numbers and was trying to prove that point to the audience, with the purpose to increase the fear in those watching the movie alone. Music and sound effects seriously affect the reality of a movie and its fear or comfort factor. A slow, soothing melody can calm the soul, yet a thrilling, quick-paced one can electrify it. Not to say that a slow song can't be frightening though. The most chilling music is found during the war scene and the church scene in Dracula. During the church scene there are many Victorian choirs, which is a clich� for church area in a horror film, yet subconsciously, it injects fear into you. Though almost 100% of the time not realised the correct music can remind you of things you are scared of and so, makes you fear the music. The most common is the Victorian music, which takes you back to a time where people were killed unjustifiably and painfully, a world only feared from your history books and never dared to imagine. This type of music also helps to build tension and suspense, all the way up until that all important and devastating climax at the end. ...read more.

In Frankenstein, the narrative perspective is given when we see the dogs getting attacked, yet we don't see the actual attacker. This shows that the director knows of the attacker, but feels as though its identity should stay secret for the moment. Consequently this builds tension until the one point where we finally see the assassin's visage. Also, it is a "holding factor", meaning that it is a distinct reason for the audience to watch on, preventing any time for idling during watching. To Summarise, the opening sequences of Dracula and Frankenstein position the audience in different ways. In Dracula, we are left in a feeling of apprehension, anxiousness and disgust. This is because the director convinces us temporarily that the story is true, then when we're down, uses camera angles and lighting harmoniously and artistically. He then uses controversial acts toward religious symbols to yank our attention, whilst fear inspiring choirs fill our ears of course, still leaving a message behind which lasts with us throughout the film. In Frankenstein the director gets our hearts racing, as we feel we are actually on a sinking ship, only mother nature herself to save us - then, giving us a healthy dose of fear when an unknown creature attacks. The director hear leaves us wanting to know much much more, as it appears the movie is going to go into a flashback, which would reveal more of Frankenstein's past. To compare, both of the films uses similar methods of positioning us to feel exactly what the director wishes, in turn making improving the video a great deal. Personally I feel as though after watch both these openings I wish to not only watch the video, but buy it and get other people too. They are both opening that leave you wanting for more, without putting you too much in the dark, so that you don't turn away. ?? ?? ?? ?? 1 1 ...read more.