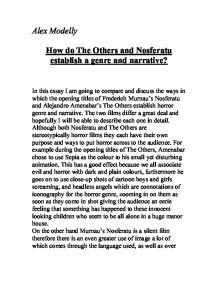 How do The Others and Nosferatu establish a genre and narrative?

Alex Modelly How do The Others and Nosferatu establish a genre and narrative? In this essay I am going to compare and discuss the ways in which the opening titles of Frederich Murnau's Nosferatu and Alejandro Amenabar's The Others establish horror genre and narrative. The two films differ a great deal and hopefully I will be able to describe each one in detail. Although both Nosferatu and The Others are stereotypically horror films they each have their own purpose and ways to put horror across to the audience. For example during the opening titles of The Others, Amenabar chose to use Sepia as the colour to his small yet disturbing animation. This has a good effect because we all associate evil and horror with dark and plain colours, furthermore he goes on to use close-up shots of cartoon boys and girls screaming, and headless angels which are ...read more.

The camera pans round from quite high and at a distance which suggests it's a crane shot. There also isn't much lighting in the scene to help the audience believe that it isn't an ordinary mansion and that something sinister will take place, in addition to that the setting creates an effect of solitude and that they are cut off from the rest of the world. Grace is first presented to us in an extreme close-up, canted angle reaction shot of her screaming which immediately makes viewers jump because there is an immense change from that long shot of the mansion to this up-close and personal shot of a worried grace, this unnerves the audience. Grace is presented to us as a potential victim because she is shown alone in an enormous mansion looking after two children; all of them set away from society leaving her to do ...read more.

He might be a potential victim because people could be jealous since he has the almost perfect life, as well as love. Or you could see it as the fact that the hero or kind-hearted person always becomes a victim at one point in the horror genre. Hutter's relationship with knock, the malicious looking businessman, is a strange one because it seems like they are best friends when there's shots of them together smiling although there are other shots when Hutter looks surprised and we then have an eye-line shot of Hutter staring at knock curiously. The two films ; The others and Nosferatu are both very appealing which looks to be a trademark of the horror genre, because they have set scary storylines; they build up suspense and trauma and then shock you with a stunning climax. ...read more.