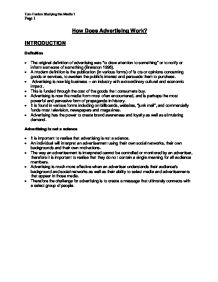 How Does Advertising Work

How Does Advertising Work? INTRODUCTION Definition * The original definition of advertising was "to draw attention to something" or to notify or inform someone of something (Branston 1996). * A modern definition is the publication (in various forms) of facts or opinions concerning goods or services, to awaken the public's interest and persuade them to purchase. * Advertising is now big business - an industry with extraordinary cultural and economic impact. * This is funded through the cost of the goods that consumers buy. * Advertising is now the media form most often encountered, and is perhaps the most powerful and pervasive form of propaganda in history. * It is found in various forms including on billboards, websites, "junk mail", and commercially funds most television, newspapers and magazines. * Advertising has the power to create brand awareness and loyalty as well as stimulating demand. Advertising is not a science * It is important to realise that advertising is not a science. * An individual will interpret an advertisement using their own social networks, their own backgrounds and their own motivations. * The way an advertisement is interpreted cannot be controlled or monitored by an advertiser, therefore it is important to realise that they do not contain a single meaning for all audience members. * Advertising is much more effective when an advertiser understands their audience's background and social networks as well as their ability to select media and advertisements that appear in those media. ...read more.

Examination of the Selected Brand * Before the actual purchase, consumers will, to a certain extent, examine several aspects with respect to the purchase of the selected brand. Purchase / Post-purchase * Finally, a consumer's evaluation of the purchased product is the most important basis for future purchases by the consumer. * After the evaluation, consumers decide to continuously purchase the same brand or to find other brands. How Advertising Works * Advertising works in a multidimensional environment, so advertising research in the academic field is made up of an integration of various fields of study including sociology, marketing and psychology. * Under the assumption that advertising must consciously or unconsciously have some mental effect on consumer behaviour a number of perspectives can be examined. Cognitive Perspectives * The "thinking" dimension of a consumer's response is analysed in cognitive perspectives. * These are used to examine the rational, informational aspect of advertising that is designed to affect the mind and to create a response based on logic. * Cognitive perspectives examine the process of advertising as information transfer. * Consumers' behaviour is formed and influenced as information is gained on the advertised product. * In this way advertising provides information in helping consumers' decisions due to the fact that the average consumer has neither the money, time or patience to evaluate all the brands in a product category. ...read more.

* It has been found that an increase in the advertising expenditure for a new product produces a higher increase in sales than for an established product. * Also, there are increasing returns to continued advertisement over time, but soon an inflection point occurs and diminishing returns set in. * It should be noted that although an audience is exposed to a certain media vehicle (e.g. a newspaper), it does not guarantee that the audience is also exposed to a certain advertisement that is delivered by the media vehicle at that time. * Exposure to the advertisement message is needed for the advertisement to have a direct impact on consumption behaviour. Integrative Perspectives * Integrative perspectives consider the concept of a hierarchy of effects between the cognitive (awareness, comprehension, knowledge), affective (evaluation, liking, preference), and behavioural (action tendencies such as intentions, trial, purchase) components. * Depending on the context in which the advertising operates, different hierarchies of the cognitive, affective, and behavioural components are assumed. * Mediating factors such as motivation and the ability to process information can alter (slightly or radically) the response to advertising or the hierarchy of effects. * During the process of consumer decision making effects happen according to a certain sequence. * The earlier effects are necessary preconditions and therefore considered more important. * The category of product and the level of involvement may also determine the order of effects as well as a hierarchy. ...read more.