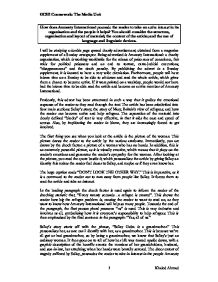 How does Amnesty International persuade the reader to take an active interest in its organisation and the people it helps?

How does Amnesty International persuade the reader to take an active interest in its organisation and the people it helps? You should consider the structure, organisation and layout of material; the content of the article; and the use of language and linguistic devices. I will be studying a double page spread charity advertisement, obtained from a magazine supplement of a Sunday newspaper. Being advertised is Amnesty International: a charity organisation, which is working worldwide for the release of prisoners of conscience, fair trials for political prisoners and an end to torture, extra-judicial executions, "disappearances" and the death penalty. By publishing the advert in a Sunday supplement, it is insured to have a very wide circulation. Furthermore, people will have leisure time on a Sunday to be able to sit down and read the whole article, which gives them a chance to become active. If it were printed on a weekday, people would not have had the leisure time to be able read the article and become an active member of Amnesty International. Prudently, this advert has been structured in such a way that it guides the emotional response of the reader as they read through the text. The article has been subdivided into four main sections: Sallay's story; the story of Mary; Britain's view of refugees; and how the reader can become active and help refugees. The separation of the material into clearly defined "blocks" of text is very effective, in that it aids the ease and speed of access. ...read more.

Again, the imperative is used with the word "listen", in order to force the reader to read on, so that Sallay being a victim can be stressed again. The paragraph ends with two very powerful rhetorical questions: "Do you imagine that she enjoyed being driven from her home, alone, penniless and terrified?" "Did she ask for her hands to be hacked off?" These stress the fact that what the government thinks of refugees is completely wrong, as it outlines the fact that refugees do not intentionally bring hardship and suffering upon themselves and that they honestly need our help. Hence, the reader feels that they have a responsibility to help them. The next section in the article is "The Story of Marie, an Ordinary Woman". A second story of an individual refugee is used, in order to emphasise how many different ways different refugees suffer. Also, the second story acts as a comparison to the first story, as it shows what happened even when a refugee who suffered such hardship made it to England. The word "ordinary" is used to stress the fact that she is just like any of us, so we can relate with her. The first sentence is, "Marie was a chemist." This illustrates the fact that she used to be normal, as she used to have a professional career, which most people in this country already do, or aspire to do. ...read more.

Throughout the final section, the pronoun "you" is used, which outlines that it is aimed directly at the reader, telling them that they are needed to help Amnesty International, explaining how they can join, and describing what they can achieve with their help. Imperatives are used again, in order to encourage the reader to act, such as the phrase, "For heaven's sake wake up and help them." In addition, emotive language is used again throughout the final section. The article ends with a personal appeal, which seems to be more of a plead for help. This is very personal and acts on both, the reader's emotions and the reader's wealth, in order to persuade even the reluctant readers to get involved. The subscription coupon is very conveniently placed at the end of the article. This aids the ease and speed of access for the reader, and as a result they will probably become active, as theirs is no hassle involved if it is placed just placed on the page. To conclude, I personally believe that if I had come across this advert in a Sunday supplement, I would have read it and if I had the means to, I would have become involved. I feel that this article is very effective in persuading the reader to take an active interest in Amnesty International, mainly because of the way that it plays on the emotions of the readers, in order to strongly get across the message of the suffering of refugees. GCSE Coursework: The Media Unit 1 Khaled Ahmad ...read more.