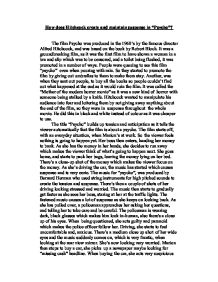 How does Hitchcock create and maintain suspense in &quot;Psycho&quot;?

How does Hitchcock create and maintain suspense in "Psycho"? The film Psycho was produced in the 1960's by the famous director Alfred Hitchcock, and was based on the book by Robert Bloch. It was a groundbreaking film, as it was the first film to have shown a woman in a bra and slip which was to be censored, and a toilet being flushed, it was promoted in a number of ways. People were queuing to see this film "psycho" even when pouring with rain. So they started to promote the film by giving out umbrellas to them to make them stay. Another, was when they sent out people, to buy all the books so people couldn't find out what happened at the end as it would ruin the film. It was called the "Mother of the modern horror movie" as it was a new kind of horror with someone being stalked by a knife. Hitchcock wanted to manipulate his audience into fear and loitering them by not giving away anything about the end of the film, so they were in suspense throughout the whole movie. He did this in black and white instead of colour as it was cheaper to use. The title "Psycho" builds up tension and anticipation as it tells the viewer automatically that the film is about a psycho. ...read more.

Marion then hears a voice of his mother's, which makes her think that there's someone else in the house, but we know that is Norman being psychotic. When he comes back with the food, his behaviour has changed, he's now acting very suspicious. He watches her eat very closely and then implies she eats like a bird. She replies, " You should know," she said this as his hobbie is taxidermy, which is a reference to death as he starts to talk about killing birds. Norman bates then says, " A boy's best friend is his mother." This is unusual as he starts to talk about how he wants to curse his mother and his hate for her. He says she has an illness. He then starts to talk about death again, when telling her about his father dying. The music then comes back on softly, when Marion mentions a madhouse to put his mother in. This shows and causes suspense and tension in the conversation. His behaviour then changes again, as he becomes unhinged all of a sudden. "We all go mad sometimes." The viewer responds to this to how Marion would. Scared, as the conversation is very unusual. It's about death and his mother. Marion feeling unnerved and unsettled so she applies she's tired and wants to leave the room. ...read more.

He used long-shots and low angle shots of the house, to give it that eerie gothic look. At the beginning, they used a close up of the money, this is so the viewer concentrated on the money, throughout the film. The other camera shots that were used was a medium close up of Marion driving, a medium shot in the shower scene and the hesitation of the cabin keys, a long shot of the police car, a high angle shot when taking the money out to buy the car. And a big close up of her eye after she had been murdered in the shower. The most camera shots were used in the shower scene, which added to the tension. In its days, psycho was a terrifying film as it is known as the "Mother of the modern horror films." This was because it was the first of its kind. Today, it makes the viewers tense with anticipation of what's to come. The main sources that built the tension was the music soundtrack that was written by Bernard Herman. Also the different camera angles that were used throughout the film. Hitchcock also used many different innovative techniques that were adopted to manipulate his audience. To add to the sound effects they used water melons and for the high pitched shrieks they used string instruments like violins. These were very effective as they added to the tension and suspense throughout the great horror movie "psycho." ...read more.