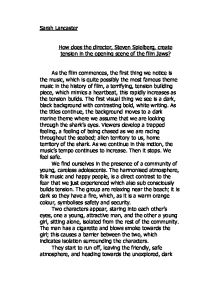 How does the director, Steven Spielberg, create tension in the opening scene of the film Jaws?

Sarah Lancaster How does the director, Steven Spielberg, create tension in the opening scene of the film Jaws? As the film commences, the first thing we notice is the music, which is quite possibly the most famous theme music in the history of film, a terrifying, tension building piece, which mimics a heartbeat, this rapidly increases as the tension builds. The first visual thing we see is a dark, black background with contrasting bold, white writing. As the titles continue, the background moves to a dark marine theme where we assume that we are looking through the shark's eyes. Viewers develop a trapped feeling, a feeling of being chased as we are racing throughout the seabed; alien territory to us, home territory of the shark. ...read more.

Two characters appear, staring into each other's eyes, one a young, attractive man, and the other a young girl, sitting alone, isolated from the rest of the community. The man has a cigarette and blows smoke towards the girl; this causes a barrier between the two, which indicates isolation surrounding the characters. They start to run off, leaving the friendly, safe atmosphere, and heading towards the unexplored, dark sea. We see the two distinctive figures running away from the protected crowd, alongside a fence, the girl undresses as she runs, as the man stumbles about. The fence stops at the beach, which shows that the territory beyond is foreign, dangerous. ...read more.

We feel as if there is something following the girl, an unwelcome presence, but there is no evidence of this. The music once again starts to race, which increases the tension further. Then it stops. She goes under. Silence until she rises from the forbidden dangerous sea, then her screams surround us, we see her struggling and splashing around tumultuously, fighting for her life. Her heavy breathing and constant shrieks make us nervous. The man lies on the beach peacefully; he is safe, calm and unaware of the happenings to his lady friend. The bell starts to ring more frantically, as does the music, tension rapidly building. The manic screams and struggles stop. The music stops. She loses, not only the fight, but also her life. ...read more.