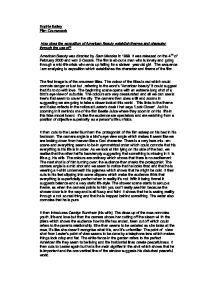 How does the exposition of American Beauty establish themes and character?

Sophie Bailey Film Coursework How does the exposition of American Beauty establish themes and character through the use of? American Beauty was directed by Sam Mendes in 1999. It was released on the 4th of February 2000 and won 5 Oscars. The film is about a man who is lonely and going through a mid-life crisis who ends up falling for a sixteen year old girl. The sequence I am analysing is exposition which establishes the character and theme of the film. The first image is of the onscreen titles. The colour of the titles is red which could connote danger or l**t but, referring to the word's "American beauty" it could suggest that it's to do with love. The beginning scene opens with an extreme long shot of a bird's eye view of suburbia. The colours are very desaturated and all we can see is tree's that seem to cover the city. The camera then does a tilt and zooms in suggesting we are going to take a closer look at this world. ...read more.

It shows that he is seeing reality through a not so real thing and that he is trapped behind something. The water also connotes that he is pure. It then introduces Carolyn Burnham (his wife). The close up of the rose connotes youth, life and love but then the camera shows her cutting off the steam with the pliers which shows the audience how its life has ended, been cut off which could refers to the parents relationship. She then seems to be sedated as she looks at the rose, it's like she doesn't recognise what it is, and it's unfamiliar. The point of view shot from Lester's point of view seems to be done by a telephone lens which makes things look crisp and flat. The white fence in the garden refers to the perfect American life they seem to be living and the horizontal lines create peacefulness. It then cuts to Lester again but he is the main signifier in the shot which shows that he is important and the one vertical line of the window suggests his disturbed peaceful world. ...read more.

He falls asleep during the car ride when he is in the back seat which kind of shows that it is childlike. It could refer to him being a baby/kid. You can't tell he is there which connotes that he isn't considered important within the family which could show the audience that he might as well not exist. The reflection of the bare branches on the car window emphasises the emptiness in his life and as the camera pans to look at the sky it shows freedom, his escape which is ironic ask he tells you that in less than a year he will be dead and it makes the audience feel that there could be a way out for him. The next scene shows Lester sat at his desk at work. While he is looking at the computer it camera seems to make you see him behind bars like he is trapped. The colours are grey and lifeless which shows that there is no excitement at work or in his life. Next to his computer is a sticker which says "Look Closer" which could be telling him to look closer at his life. ...read more.