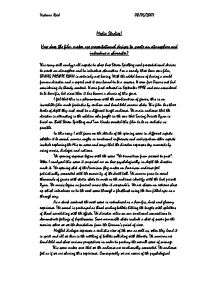 How does the film maker use presentational devices to create an atmosphere and introduce a character?

Media Studies! How does the film maker use presentational devices to create an atmosphere and introduce a character? This essay will analyze all aspects to show how Steven Spielberg used presentational devices to create an atmosphere and to introduce characters. For a nearly three hour war film, SAVING PRIVATE RYAN is certainly not boring. With the added bonus of having a world famous director and a superb cast it was bound to be a success. It won five Oscars not bad considering its b****y content. It was first released in September 1998 and was considered to be horrific, but since then it has become a classic of this genre. I feel that this is a phenomenon with the combination of genres, this is an incredible film made fantastic by realism and hand held camera shots. This film has three levels of depth they each reach to a different target audience. The main audience that the director is attracting is the soldiers who fought in the war that Saving Private Ryan is based on. ...read more.

The sound is portrayed as blood curling bullets hitting the targets with splatters of blood correlating with the effects. The director relies on our emotional connections to demonstrate feelings of hopelessness. Some memorable shots include a shot of power for the enemies where we see the devastation from the German's point of view. Muffled dialogue expresses a realistic view of the war as well as, when they land it is quiet and all we hear is the rattling of bullets colliding with helmets. The cameras are hand held and show various perspectives in order to portray the overall scene of carnage. This scene makes sure that we the audience are emotionally connected. The audience feel as if we are sharing this experience. Consequently we are aware of the psychological aspects that Captain Miller is feeling during coming face to face with the carnage of this scene. The focus of this scene is to make us identify with the horrors around him by using slow motion and jerky shots. ...read more.

When the camera angle pans we witness the b****y sea lapping at the horrific imagery of the still and lifeless bodies now at peace after the mass slaughter of the b****y battle. This scene also shows how struggling soldiers defended themselves by using dead comrades as human shields, this is a very poignant scene supported with the splatters of blood on the camera. The purpose of this essay was to analyse how the director uses presentational devises to create an atmosphere and the introduction of a character. In my opinion Steven Spielberg made this film as realistic as is conceivably possible. This was aided by the factor that he used real amputees for a more realistic effect. The presentational devises were extremely effective in all aspects whether it be dialogue, music or actions. In my opinion this is an extremely harrowing film with elements of treachery, morals and sanctity. I think that this film has expressed what veterans had to face. Steven Spielberg has tactfully recreated the war with reality, honour and pride. ?? ?? ?? ?? Victoria Reid 08/05/2007 ...read more.