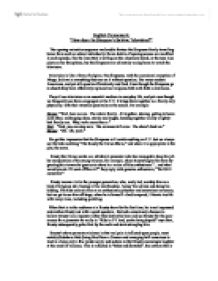 &quot;How does the Simpson's Satirize Television?&quot;

English Coursework: "How does the Simpson's Satirize Television?" The opening animation sequence and credits feature the Simpsons family travelling home from work or school individually. Some details of opening scenes are modified in each episode, like the lines Bart is writing on the classroom board, or the tune Lisa plays on her Saxophone, but the Simpsons are ultimately racing home to watch the television. Television is like a form of religion, The Simpsons, with the occasional exception of Marge, believe in everything they see on it without question, like many modern Americans, and yet still question Christianity and God. Even though the Simpsons go to church they have effectively replaced real religious faith with faith in television. They all see television as an essential medium in everyday life, and yet even though we frequently see them congregate at the T.V. it brings them together as a family only physically, with their attention passively on the screen. For example: Homer: "Well, here we are. The whole family. All together, sharing, getting to know each other, exchanging ideas, stories and laughs, bonding together as only a tightly-knit family can. ...read more.

When Bart is in the audience at a Krusty show for the first time, he is not impressed and catches Krusty out with a quick question , Bart sub-consciously chooses to believe Krusty is an impostor rather than betray his hero and see Krusty for the poor excuse for a presenter he really is: "Kids in TV land, you're being duped!" says Bart, Krusty subsequently grabs Bart by the neck and starts strangling him. Krusty's show promotes violence in that real pain is inflicted upon people, most notably Sideshow Bob (being fired from a Cannon and emerging half-conscious to land in a heap only a few yards away), and sadism in that Krusty encourages laughter at the result of violence. This is reflected in "Itchy and Scratchy", the cartoon that is loosely based upon "Tom and Jerry", the main difference being that in "Itchy and Scratchy," the mouse insinuates violence and generally succeeds in killing the cat in various evil ways in every 10 second episode. "Itchy and Scratchy" is deliberately poorly animated, with few key-frames and appalling use of squash and stretch. ...read more.

across as being bored in that he would rather read a story about a kitten than report on the President of the USA being found guilty of murder. So within the Simpsons T.V. is like a false religion and its presenters false idols. The Simpsons is, however, just a cartoon and although it may mimic a moral agenda, it has none. The Simpsons humour works by putting forward positions only to undercut them. This may seem cynical but the Simpsons humour is so well thought-out it even manages to undercut it's cynicism too. This is true to life in America but fortunately T.V. is of a lower standard over there than in Britain. Both countries, however, share the faith and reliance in television and its messages. Satire can be used to attack anybody at all who thinks that he or she has any sort of handle on the answer to any major question or is simply powerful or influential. The reason The Simpsons work is because we live in a world of coercive media and each episode is a joyous release from that precisely because the programme's creators understand, and satirise it. ...read more.