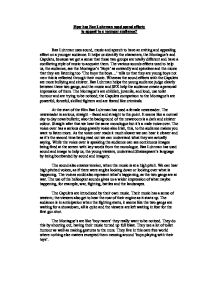 How has Baz Luhrman used sound effects to appeal to a younger audience?

How has Baz Luhrman used sound effects to appeal to a younger audience? Baz Luhrman uses sound, music and speech to have an exiting and appealing effect on a younger audience. It helps us identify the characters, the Montague's and Capulets, because we get a sense that these two groups are totally different and have a conflicting style of music to acquaint them. The various sounds effects used to help us, the audience, see the Montague's 'Boyz' as cowardly and spineless and the music that they are listening too 'The boys the boys...' tells us that they are young boys not men this is reflected through their music. ...read more.

The newsreader is serious, straight - faced and straight to the point. It seems like a normal day to day news bulletin; also the background of the newsroom is a dark and sinister colour. Straight after that we hear the same monologue but it's a male voice over. The voice over has a serious deep gravely voice also Irish, this, to the audience makes you want to listen more. As the voice over reads it much slower we can hear it clearer and as it's the second time being read out we can understand what they are actually saying. While the voice over is speaking the audience can see continuous images being fired at the screen with key words from the monologue. ...read more.

The Capulets are introduced by their own music. Their music has a sense of western; the viewers also get to hear the roar of their engine as it starts up. The audience is in anticipation when the fighting starts, it seems like the two gangs are waiting for a showdown, all is quite and the viewers are left waiting in fear for the first gun shot. The Montague's are like 'boy racers' they really want to be noticed. They do this by shouting out, having their music turned up full blast. They use a lot of toilet humour as well as making gestures to the nuns. They live in this care free world where nothing else matters excepted them messing around 'boys playing with their toys'. ...read more.