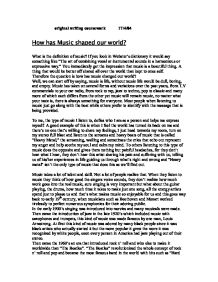 How has Music shaped our world?

original writing coursework 17/4/04 How has Music shaped our world? What is the definition of music? If you look in Webster's dictionary it would say something like "The art of combining vocal or instrumental sounds in a harmonious or expressive way." You immediately get the impression that music is a beautiful thing. A thing that would be better off shared all over the world than kept to ones self. Therefore the question is how has music changed our world? Well, we can start off by saying, music is life, without music life would be dull, boring, and empty. Music has taken on several forms and variations over the past years, from T.V commercials to your car radio, from rock to rap, jazz to techno, pop to classic and many more of which each differs from the other yet music will remain music, no matter what your taste is, there is always something for everyone. Most people when listening to music just go along with the beat while others prefer to identify with the message that is being provided. To me, the type of music I listen to, defies who I am as a person and helps me express myself. ...read more.

At first this kind of music was adored by many black people since it was black artists who actually started it but the more popular it grew the more it was recognized by white people, soon every person in America had jazz playing out of their stereo. Then came the 1960's an era that introduced rock n' roll and who else to make it worldwide than "The Beatles". "The Beatles" revolutionized the whole concept of rock n' roll and pop and became the most famous band in the world with hits such as "Hard Days Night." Up to this day the Beatles are still recognized as one of the greatest bands ever, many claim without their arrival, music would've been lost. The 1960's also produced another great artist in Elvis Presley, an American who adopted a similar kind of style to the Beatles, yet he was talented enough to perform solo. He is still remembered up to this day mostly for his stylish look, deep voice and his keen sense of fashion. As the rock n' roll era faded, disco began to gain fame, the idea of listening to groovy beats in a dark club with an illuminated aluminum ball hanging from the top captured many of the public's imaginations, disco resembles what we call today, Techno music. ...read more.

Another issue worth mentioning is the language artists use these days, many elders find it crude and offensive, but what's wrong with how someone expresses themselves, and anyway they've taken precautions by labeling their albums as parental advisory. Another bad side of music is that good, popular music is starting to fade away. Now we just have pretty models to look at, while their music is full of unoriginality, I don't even think they should earn the image of being "musicians." Songwriting and musical ability is no longer what makes a musician famous. Spokes models such a s Britney, Chirstina, Backstreet, Enrique Iglesias etc, are more likely to earn more money and success than actual musicians because what is being marketed now is looks instead of music. There are decent bands coming out of England such as Muse, but they are in the shadows of their American counterparts, who can be good musicians but in the same time can be money churning concoctions. The English population therefore should protect their money, and open their senses to notice this and so also protect their children and culture by moving away from American culture and support English bands. As long as they don't take action English music dies. ...read more.