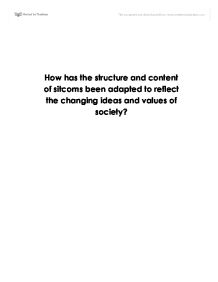 How has the structure and content of sitcoms been adapted to reflect the changing ideas and values of society?

This does however hark back to the values of the pre-90's sitcoms like Steptoe and Son and The Good Life - that 'family' (and in this context this refers to the close knit group of friends) comes first. A lot of the humour in the traditional British sitcoms is derived from class distinction and the contrasts between these two classes - this is particularly evident in The Good Life, in which Tom and Barbara Good decide to give up working for a living and instead enjoy a self-sustained lifestyle. This is in great contrast to their neighbours and friends, the Leadbetter's, who are very upper class and disparaging of Tom and Barbara's new lifestyle choice. The majority of disequilibrium (as relating to Todorov's theory) came from a problem the Good's faced in maintaining their self-sufficiency - whether it be a lapse back into middle-class for Barbara or Tom's pigheadedness causing a minor problem to develop. They are continually challenged by Margot Leadbetter, who is a stereotypical snob with no sense of humour, who tolerates but doesn't understand their choice at all. While The Good Life was being produced in the 1970's, a revival of sorts was taking place concerning self-sufficiency and the growing snobbery of the middle class. The show was hailed as a great support to the cause as it showed it in a very positive light - Tom and Barbara face a great deal of adversity in turning their South London home into a small farm, however they always overcome these issues and equilibrium is restored. ...read more.

Class distinction is also explored in Jam and Jerusalem, with Sal's daughter Tash being a hippy and living on a commune with her illegitimate son at the beginning of the programme. Tash's alternative lifestyle is a focal point in the second series with her impending wedding to Spike - a 'traditional' wedding proves too expensive and complicated so the whole village, including the other members of the WI, pull together to create a home-grown gypsy wedding, showing that the differences between classes can be overcome by a common goal. Each sitcom studied reflects some aspect of society - the class distinction and its associated friction in Fawlty Towers, family life in My Family and lifestyle choices in The Good Life and Two Pints of Lager and a Packet of Crisps. Ultimately the sitcoms that we see today are echoes of the ones that have gone before. Whilst their setting and even content may have changed the underlying structure remains the same - whilst the traditional family may have been replaced in such programmes as Two Pints, the essential format has remained the same. The reason for this development and renewal is that sitcoms need to change and evolve as society does - a perfect family such as The Brady Bunch holds no real appeal to a modern audience as Two Pints or My Family because dysfunctional families are commonplace in modern life, and make plotlines about family life much easier to write. Sitcoms have a close link with the social and economic milieu from which they emerge, however, they are ultimately about people, and people do not change. ...read more.