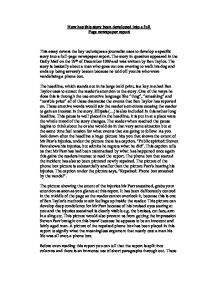 How has this story been developed into a full Page newspaper report.

How has this story been developed into a full Page newspaper report This essay covers the key techniques a journalist uses to develop a specific story into a full-page newspaper report. The story in question appeared in the Daily Mail on the 29th of December 1999 and was written by Ben Taylor. The story is basically about a man who goes out one evening to walk his dog and ends up being severely beaten because he told off youths who were vandalising a phone box. The headline, which stands out in its large bold print, is a key method Ben Taylor uses to attract the reader's attention to the story. One of the ways he does this is through the use emotive language like "thug", "smashing" and "terrible price" all of these dramatise the events that Ben Taylor has reported on. These emotive words would stir the reader's emotions causing the reader to gain an interest in the story. Ellipsis (...) is also included in this rather long headline. This pause is well placed in the headline, it is put in at a place were the whole mood of the story changes. The reader when reached the pause begins to think about he or she would do in that very same situation but at the same time feel tension for what events that are going to follow. ...read more.

Pyramid writing is another technique Ben Taylor uses to develop this story into a full-page report; the story is developing all the time as you go through the report. There is also a basic sentence structure used in the report, first Ben Taylor writes the subject of the sentence puts in a comma and then goes on and gives information about the subject. Ben Taylor has also included factual information to develop the report by creating a pleasant character profile of Mr Parr for the reader. In the first paragraph of the report it tells us Mr Parr had a springer spaniel, this immediately reveals to us that Mr Parr must have an amiable and considerate character if he has that type of gentle Dog. In paragraph three this technique is used once again it tell us Mr Parr has two children, "The father of two". This creates a picture of Mr Parr being a caring family man. These pieces of factual information are slipped in to try and show that Mr Parr didn't deserve the injuries or trauma he has received. Quotations are a key element on how the author develops this into a full-page report. Ben Taylor has sets out his quotes in a typical tabloid style. ...read more.

In this report there are many examples of Ben Taylor using emotive and dramatic words to manipulate our responses, "Thug", "Smashing", "Frenzy" and "Sickening" to name a few. Ben Taylor could had told readers about the events without using these words but these words are an important method to keep the readers attention and getting the reader on Mr Parr side. The report that was written could easily be labelled biased because of the way the author dramatise the story to get the reader to feel for Mr Parr. This language has succeeded in getting the reader to feel sympathy for Mr Parr and at the same time being appalled with the youth who carried out the attack. You can also notice that before Ben Taylor records Mr Parr's words he adds his own words, "With his voice shaking", to give more feelings to the one Steven Parr says. Ben Taylor would twist Mr Parr's words so the reader would feel more and more consideration for Mr Parr. My final conclusion of the report is that Taylor has made good use of the various writing techniques available to him, like emotive language, and detailed accounts of what happened. But at the end of the day I cant still help but feel that Steven Parr should of thought a moment longer before jumping in to save a telephone box. ...read more.