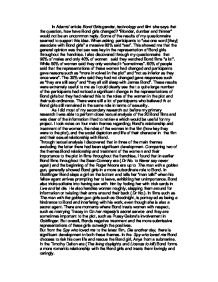 How have Bond girls changed?

In Adams' article Bond Girls:gender, technology and film she says that the question, how have Bond girls changed? "Blonder, dumber and thinner" would not be an uncommon reply. Some of the results of my questionnaire seemed to support this idea. When asking participants to "use one word [they] associate with Bond girls" a massive 80% said "sex". This showed me that the general opinion was that sex was key in the representation of Bond girls throughout the franchise. I also discovered through my questionnaire that 90% of males and only 40% of women said they watched Bond films "a lot". While 50% of women said they only watched it "sometimes". 60% of people said that the representations of these women had changed and participants gave reasons such as "more involved in the plot" and "not as inferior as they once were". The 30% who said they had not changed gave responses such as "they are still sexy" and "they all still sleep with James Bond". These results were extremely useful to me as I could clearly see that a quite large number of the participants had noticed a significant change in the representations of Bond girls but they had related this to the roles of the women in the plot and their sub-ordinance. There were still a lot of participants who believed that Bond girls still remained in the same role in terms of sexuality. As I did most of my secondary research out before my primary research I was able to perform close textual analysis of the 20 Bond films and was clear of the information I had to retrieve which would be useful for my project. ...read more.

Throughout the series Bond seems to bed one girl in the beginning of the film and ends in bed with another. This has not changed with the exclusion of the two films with Timothy Dalton. Double entendres still flow from Bonds mouth as readily as they did before "you said something about going down together?" The world is not enough. The quite sexual imagery used in the title sequence of almost every Bond film has still not changed in its nature, as it still contains images of silhouettes of naked/half-naked women dancing. This shows that women are still being reflected as objects of desire in every film. So through my research I have decided that sex is a very key element in the representations of the Bond girls. A character I noticed when performing textual analysis was Moneypenny, who has been an ever-present female character. I thought by following her development it would give me a good idea into how the roles of the women in Bond have evolved. But this was more difficult than I thought. I discovered that the first Moneypenny played by Lois Maxwell from Dr No. to A view to a kill was extremely witty and seemed to genuinely be interested in Bond even hinting at a wedding ring in Diamond are forever. Caroline Bliss' Moneypenny in The living daylights and License to kill seemed more reserved and had a little crush on Bond. The latest Moneypenny, played by Samantha Bond is very professional and seems to just have sexual fantasies about Bond (as seen in Die another day). ...read more.

Barbara Broccoli even became the first female producer on Bond films in Goldeneye. In the documentary Bond girls are forever. Producer Mike Wilson said in an interview during Die Another Day " Half of my executives are women. My mother is chairman of the company." He also says that his " chief financial officer" and "chief publicity officer" are female and that there is "a lot of input from women in [the] scripts." This shows that the representation of women in Bond have defiantly changed as the number of women behind the Bond series have changed and this would defiantly have an impact on the series. Ultimately, I believe the role of women in James Bond in some ways has changed a lot. They have more important and diverse roles in the script, they seem to be have huge effects on Bond's character and emotions (e.g. Bond being emotionally touched at the death of Electra in The world is not enough). They are also being represented as being more valued members in the society depicted in Bond films, from being a shell collector to being the boss of Bond. But in other ways, namely the sexual denotation of the women, things have not changed. Bond still seduces and beds women quickly, using witty one liners "I'm here for the birds" (Die another day). Women are also dressed as seductively as possible. So in conclusion I believe that the representation of women have changed a great deal over the Bond franchise as they are more independent and strong but in other ways they have remained in the same mould as they are still portrayed as sexually assertive and easy to seduce. ...read more.