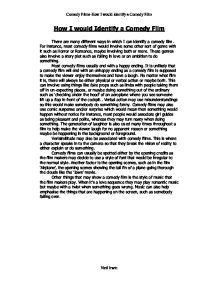 How I would Identify a Comedy Film

How I would Identify a Comedy Film There are many different ways in which I can identify a comedy film. For instance, most comedy films would involve some other sort of genre with it such as Horror or Romance, maybe involving both or more. These genres also involve a story plot such as falling in love or an ambition to do something. Most comedy films usually end with a happy ending. It is unlikely that a comedy film will end with an unhappy ending as a comedy film is supposed to make the viewer enjoy themselves and have a laugh. ...read more.

Verbal action may use misunderstandings so this would make somebody do something funny. Comedy films may also use comic suspense and/or surprise which would mean then something would happen without notice for instance, most people would associate girl guides as being pleasant and polite, whereas they may turn nasty when doing something. The generation of laughter is also used many times throughout a film to help make the viewer laugh for no apparent reason or something maybe be happening in the background or foreground. ...read more.

Another factor is the opening scenes, such as in the film 'Airplane', the opening scenes showing the tail fin of a plane going thorough the clouds like the 'Jaws' movie. Other things that may show a comedy film is the style of music that the film makers play. When it's a love sequence they may play romantic music but maybe with a twist when something goes wrong. Music can also help emphasise the things that are happening on the screen, such as somebody falling over. Comedy Films-How I would identify a Comedy Film Neil Irwin ...read more.