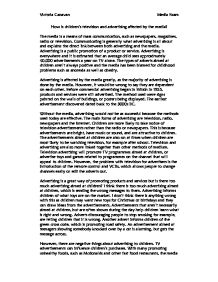 How is children's television and advertising affected by the media?

However, the problem with television for advertisers is the introduction of the remote control and VCRs, which allows people to change channels easily or edit the adverts out. Advertising is a great way of promoting products and services but is there too much advertising aimed at children? I think there is too much advertising aimed at children, which is sending the wrong messages to them. Advertising informs children of what toys are on the market. I don't think there is anything wrong with this as children may want new toys for Christmas or birthdays and they can draw ideas from the advertisements. Advertisements that aren't necessarily aimed at children, but are often shown during the day help children learn what is right and wrong. Adverts discouraging people to stop smoking for example, are telling children that it is wrong. ...read more.

Advertisements promoting unhealthy foods use unrealistically thin body types as the ideal. I think this is giving children mixed signals and is contradicting the message. In this way, children are being taught to be thin, but eat fatty foods and sweets. This could also lead to problems with young girls developing eating disorders. The media affects advertising generally in a positive way. The negative aspects mentioned above, are being taken into account, as England is pushing for stricter guidelines for advertising aimed at children. There is a strong link between the media and advertising. Without the media, the only form of advertising would be posters on walls or billboards. This would not be as effective, especially for children's advertisers, as they would not be as noticeable. Overall, I think there is too much advertising aimed at children and believe the media has not directly affected the rise in obesity, but does have a part to play in the increase. ?? ?? ?? ?? Victoria Canavan Media Exam ...read more.