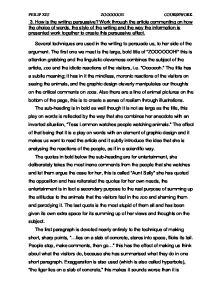 How is the writing persuasive? Work through the article commenting on how the choice of words, the style of the writing and the way the information is presented work together to create this persuasive effect.

3. How is the writing persuasive? Work through the article commenting on how the choice of words, the style of the writing and the way the information is presented work together to create this persuasive effect. Several techniques are used in the writing to persuade us, to her side of the argument. The first one we meet is the large, bold title of "ZOOOOOOH!" this is attention grabbing and the linguistic cleverness combines the subject of the article, zoo and the idiotic reactions of the visitors, i.e. "Ooooooh." The title has a subtle meaning; it has in it the mindless, moronic reactions of the visitors on seeing the animals, and the graphic design cleverly manipulates our thoughts on the critical comments on zoos. Also there are a line of animal pictures on the bottom of the page, this is to create a sense of realism through illustrations. The sub-heading is in bold as well though it is not as large as the title, this play on words is reflected by the way that she combines her anecdote with an inverted situation, "Tess Lemmon watches people watching animals." The effect of that being that it is a play on words with an element of graphic design and it makes us want to read the article and it subtly introduce the idea that she is analysing the reactions of the people, as if in a scientific way. ...read more.

we think she is not biased, but rather using the title, she hides herself and still, gives us the biased opinions under the pretence of being a scientist, "having spent hours..." She repeats herself once more as she says, "watching people watching animals," this merely emphasis the point that her subject is on humans and repeating the point in the sub-headings, this is also an anecdote so that we believe in her because she has experience. She then goes on to say her conclusions after giving us her title of an anthropologist and make her sound more reliable, she goes on to say about her opinions of zoos, it is almost a directive/imperative language as she says, "no zoo can fulfil... no zoo can bring about...presents a distorted picture..." this almost commands us to believe in her research and her conclusion. Also another important is the use of 3 words grouped together, "good, bad, best in the world" the "good, bad, best," bit emphasises the point, it somehow strengthens and stresses the point she is making. Another good persuasive trick used by her is to mingle fact with opinion and make it sound all like fact, in this next paragraph we see her doing just that, "many of the main European zoos were founded at the beginning of the last century..." ...read more.

In the first question we see the exaggeration of "slab" which can be a repetition as well. She has repeated the shortcomings of the zoos to emphasise her point. Also she in the end kept the readers in deep thoughts at the end through her last rhetorical question. In conclusion, we see that she uses various techniques to persuade us, she repeats points to emphasise her points, she puts anecdotes in for real experiences, she keeps the reader feeling important by the use of questions asking for their opinions, put comparisons between objects e.g. her scientific views and immediately after the Aunt Sallies, exaggeration (hyperbole), selective descriptions of the zoo e.g. slabs of concrete, including informal speeches in so to make the reader feel at ease, she doesn't exaggerate too mush to make it sound like a campaign or an advert, she kept it informative, she included a lot of passion and emotive languages, she kept entertainment as a secondary purpose, she has made scapegoats e.g. the zoo directors, she has invoked sympathy from the readers over the conditions of the animals, she has reiterated the quotes so that it is out of context and makes the visitors look bad, she has in it a lot of short sharp point, she appealed to people's consciences by including a lot of emotive languages and she has kept the readers in deep thoughts at the end of it. PHILIP XIU ZOOOOOOH COURSEWORK ...read more.