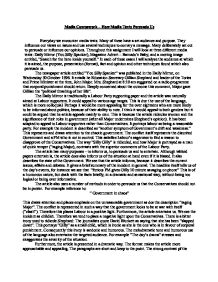 How Media Texts Persuade Us.

Media Coursework - How Media Texts Persuade Us Everyday we encounter media texts. Many of these have a set audience and purpose. They influence our views on issues and use several techniques to convey a message. Many deliberately set out to persuade or influence our opinions. Throughout this assignment I will look at three different media texts: Daily Mirror (You Silly Spanker), Magazine Advert - Barnado's Baby, and a moving image entitled, "Search for the hero inside yourself." In each of these cases I will analyse the audience at which it is aimed, the purpose, presentation (format), fact and opinion and other techniques found which also persuade us. The newspaper article entitled "You Silly Spanker" was published in the Daily Mirror, on Wednesday 30 October 1996. It entails he Education Secretary Gillian Shephard and leader of the Tories and Prime Minister at the time, John Major. Mrs. Shephard at 8:10 am suggested on a radio programme that corporal punishment should return. Deeply concerned about the outcome this comment, Major gave Gillian the "political thrashing of her life". The Daily Mirror is traditionally a Labour Party supporting paper and the article was naturally aimed at Labour supporters. It could appeal to various age ranges. This is due the use of the language, which is more colloquial. Perhaps it would be more appealing for the over eighteens who are more likely to be informed about politics, because of their ability to vote. I think it would appeal to both genders but it could be argued that he article appeals mainly to men. This is because the article ridicules women and the significance of their roles in government (after all Major undermines Shephard's opinion). It has been adapted to appeal to Labour supporters rather than Conservatives. It portrays labour as being a reasonable party. For example the incident is described as "another symptom of Government's drift and weakness." ...read more.

We are intrigued when reading the text. The shock that is felt from the advertiser caused a great deal of controversy, which led to further publicity. As a result the advertisement is very memorable. The advertisment method known as Involvement is also used in the media advertisment. We become involved om the advert when we work out the link between the paradoxical headline and the picture.We are given a glimpse into John's traumatic life. The shock of the picture and this use of involvement brings us to interact with the picture. We are shocked at our complacency hence the advertisement is memorable. In my opinion the advertisement was suitable for public viewing because I feel the shocking picture is successful in persuading readers to give money. The end justifies the shocking reminder of child neglect and drug addiction. However, I feel the ad would be too shocking for children to see because they may not be mature enough to understand the purpose of the ad. They may perceive it in an incorrect light. Many complaints were made to the Advertisement Standards Authority (ASA) about Barnado's appeal. The ASA justified the advertisement saying that "using the stark image as a baby drives home its role as a safe haven." The complaints referred to the newspaper campaign as offensive, but ASA believed Barnado were trying to convey a "serious and important message." As a result of such complaints the Guardian replaced the image with than of a happier baby. I disagree with such complaints. I believe that the only way readers will acknowledge the severity of such situations concerning innocent babies is if they face up to the problems such as these occurring in society today. Remaining ignorant to such serious child abuse will not help the victims. Remaining oblivious to these circumstances will not spur people to donate money. Raising awareness through realistic pictures may encourage generous donations. ...read more.

All are targeted at an audience and a specific purpose. For all three media, shock tactics were used. In the "Silly Spanker" article, we find the dramatic use of words shocking and somewhat sardonic. In Barnado's Baby, the image of the neglected baby is shocking just like the girl placed in danger and other images in the "Search For The Hero Inside Yourself" advert. In "You Silly Spanker" opinionated fact play on emotions, deviously influencing our opinion. This is also seen in Barnado's Baby and the moving image. Therefore media texts are always opinionated in some way and are devised to gain our approval. Companies place argument on a slant. As my personal response, I preferred the moving image advert rather than the others. I found the combination of music, images and language somewhat intriguing. It was far more rewarding than the others when I understood the connection/purpose of the range of images used. The images were far more intellectually challenging, I felt, because they represented many different themes. They catered to appeal to many different audiences - for example, the reference to Tianannmen Square was also most subliminal and interesting to analyse because it was very anonymous (it required a huge response from the audience) and the repeated use of red caused me to question its significance. The Red Indian putting on war paint was not straight forward, but again, entailed a great deal of thought into the fact that these people were victims of oppression, therefore showed courage. I like the way the man cutting himself shaving echoes the image of a Red Indian applying war paint. Both the advert implies that they are brave and courageous characters in their own ways and in their own time. It appealed to women because of the baby's birth, to men due to football, and even to those familiar with contemporary movies. Therefore, I feel that the mixture of all these was more thought provoking than the others, perhaps also due to the advantage of a better visual stimulation. ...read more.