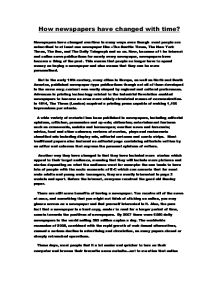 How newspapers have changed with time? Impact of television and Internet, target audiences and presentational devices.

How newspapers have changed with time? Newspapers have changed overtime in many ways even though most people are subscribed to at least one newspaper like--The Seattle Times, The New York Times, The Sun, and The Daily Telegraph and so on. Now, because of the internet and online news publications for nearly every newspaper, newspapers have become a thing of the past. This means that people no longer have to spend money on buying a newspaper and also means that they can be more personalised. But in the early 19th century, many cities in Europe, as well as North and South America, published newspaper-type publications though not all of them developed in the same way; content was vastly shaped by regional and cultural preferences. Advances in printing technology related to the Industrial Revolution enabled newspapers to become an even more widely circulated means of communication. In 1814, The Times (London) acquired a printing press capable of making 1,100 impressions per minute. A wide variety of material has been published in newspapers, including editorial opinions, criticism, persuasion and op-eds; obituaries; entertainment features such as crosswords, sudoku and horoscopes; weather news and forecasts; advice, food and other columns; reviews of movies, plays and restaurants classified ads including display ads, editorial cartoons and comic strips. ...read more.

In all, only 39 percent of the stories were related to dangerousness, smaller than the 50 to 75 percent of stories reported in earlier research but consistent with the approximately 30 percent of stories found by Wahl and colleagues. However, more stories fell into the dangerousness category than any other category. Hence, the public is still being influenced with messages about mental illness and dangerousness. Findings suggest the complexity of these results. A majority of stories are about violent crime against others or legal defences related to mental illness. However, stories in this group also included themes of suicidal or self-injurious behaviours and non-violent crimes. Stories related to dangerousness often ended up in the front sections of newspaper, making them more visible to readers. The target audience depends on the section of the paper. The funnies would be children. The sports would (most likely) be men. The economical section would be adults in general; usually newspapers and magazines targeted audience is the General Public. In the case of newspapers, it it's own local people. In some magazines, their target audience is business owners and well to do rich folk. Some have specific audiences like "music lovers", "car lovers", or nature lovers. In most newspapers and magazines there's something in there to read for everyone. ...read more.

might be used tomake ideas stand out or to suggest a theme. Something about horror could be done in a wavy font for example. * font size :Font size might also be important as larger fonts make things stand out more. * Bullets: Bullet points help with lists so that information is easier to find and read. Check for the shape of the bullet used as they might have a message. These ticks, for instance, give a positive image. * Colour: Colours attract attention. There are many reasons why a colour has been used; Red could stand for passion or danger. Blue could suggest coldness or masculinity. * Logos: Logos are designs that stand for a company. They are also used to make you trust the product or writing. * Captions: A caption is the little bits of writing placed underneath pictures to tell you what the picture is about. It may be a quote from the text. * Maps and graphs: Maps might be used to help you understand where a place is. Graphs of all types could be used to help you understand numerical information. * Information boxes: These are boxes put on the page so that extra information can be added. * Columns: These are mainly used in newspapers and magazines where the text is put in blocks down the page. Some leaflets also use this idea. Presentational devices help the way a text looks on the page and how it is organised. Presentational Devices ...read more.