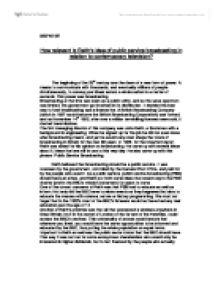 How relevant is Reith's idea of public service broadcasting in relation to contemporary television?

02074512E How relevant is Reith's idea of public service broadcasting in relation to contemporary television? The beginning of the 20th century saw the dawn of a new form of power. A means to communicate with thousands, and eventually millions of people simultaneously, to convey your ideas across a whole nation in a matter of seconds. This power was broadcasting. Broadcasting at the time was seen as a public utility, and as the wave spectrum was limited, the government got involved in its distribution. It decided the best way to fund broadcasting was a license fee. A British Broadcasting Company (which in 1927 would become the British Broadcasting Corporation) was formed, and on November 14th 1922, after over a million ten-shilling licenses were sold, it started transmissions. The first managing director of this company was John Reith, a Scotsman with a background in engineering. When he signed up for the job he did not even know what broadcasting meant, and yet he would very soon shape the future of broadcasting in Britain for the next 80 years. In 1925, for the Crawford report, Reith was asked for his opinion on broadcasting. He came up with several ideas about it, ideas that are still in use to this very day. ...read more.

We know have in England four analogue public service broadcasting channels: BBC1, BBC2, Channel 4 and Channel 5. Even though the two latter ones do carry advertising, they are still public service broadcasting channels, in comparison to ITV, which is privately owned. There are some PSB digital channels being rolled out by the BBC, like BBC choice (soon to be replaced by BBC3), Cbeebies, a children's channel, BBC4 and a learning zone channel). However these are not yet widely available, as not many households possess digital receivers yet. Let us look at the "terrestrial" channels, and how they measure up to Reith's ideas. Firstly Reith wanted to inform and educate. BBC1 carries the BBC's news bulletins as well as documentaries and educational programs. BBC2 carries a lot of educational programs for children in the mornings, many factual programs during peak time in the evening, and learning zone at night. Channel4 also has educational and factual programs but only one news program albeit of high quality. Channel 5 has short news bulletins on the hour every hour and "super serves for the pre-school age group" (C5 corporate web site).However, these do not make up the most of these channels' programming grid. ...read more.

Nowadays, if PSB is to cater for all minorities, the moral code has to change: if any of the public service channels banned a violinist as Reith did because she was a divorcee, they would be fined by regulations authorities. Our society has become much more tolerant, and public service broadcasting reflects this on all channels. Most of Reith's ideas about PSB are relevant to contemporary PSB channels. However commercial channels do not abide by these ethics. Graham Murdock said that "audiences are addressed by PSB as citizens, not consumers" as they are by commercial channels. The aim of these channels it to make as much money as they can through advertising, and to achieve this they need ratings. This compromises on quality and does not allow them to do things that PSB can and must: address audiences that advertisers are not interested in, thus catering for everyone. The future is bringing a new challenge: digital channels. These will be able to target much more precise audiences: catering for minorities or better aimed advertising? Only time will tell, but if PSB has managed to survive 80 years, with changes as radical as the introduction of TV, there is no reason to think it will not survive in the digital age. Auntie is here to stay. ...read more.