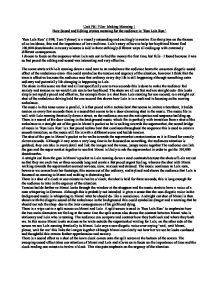 Unit FS1 Film- Making Meaning 1 How Sound and Editing creates meaning for the audience in 'Run Lola Run'. 'Run Lola Run' (1998, Tom Tykwer) is a visually astounding and excitingly inventive film that plays on the themes of co-incidence, fate and the importance of love and time. Lola's story of how to help her boyfriend Manni find 100,000 deutchmarks in twenty minutes is told in three strikingly different ways all ending up with extremely different consequences. I choose to focus on the sequence when Lola sets out to find the money the first time, but fails - I found because it was so fast paced the editing and sound was interesting and very effective. The scene starts with Lola running down a road next to an ambulance the audience hears the on-screen diegetic sound effect of the ambulance siren- this could symbolise the tension and urgency of the situation, however I think that the siren is effective because the audience sees that ordinary every day life is still happening although something extra ordinary and potentially life changing is happening to Lola. The shots in this scene are fast and all last specifically one to two seconds this is done to make the audience feel anxiety and tension as we watch Lola run to her boyfriend. ...read more.

There is a wipe cut to a split screen on Manni and Lola. A split screen is used in 'Run Lola Run' to emphasise how the two main characters are feeling at the same time the spilt screen also shows the contrast between Manni who is stationary and Lola who is running. The audience can compare and contrast how they both look and where they both are. In this scene Manni looks anxious as he waits outside the supermarket waiting for Lola, on the other side of the screen we see Lola running frantically to Manni. Lola says a non-diegetic voice-over saying 'wait, wait Manni, please, wait for me' this links the images together although Manni can clearly not hear her we see he looks confused and thoughtful this creates further apprehension and anxiety. There is a sound effect as a shot of the town clock comes onto the split screen at the bottom of the screen. The sweeping sound effect takes our attention of Manni and Lola and allows us to focus on the importance of time and the clock reading one minute to twelve o'clock. This also puts emphasis on the urgency of the situation. The clock then wipe cuts out of the split screen and we can see Manni walking into the shop with Lola behind him. ...read more.

There are fast paced shots from the bag to the policeman, Manni and Lola as Lola is shot. All sounds including the music stop when the gunshot is seen and heard- this is done to show the impact and shock on the audience, and to show the obvious importance of this event. The audience can faintly hear Lola's breathing as orchestral, sad; violin music is slowly heard this is too adding extra shock and sadness. There is emphasis on Manni dropping his gun - this sounds louder than it naturally would, this shows the impact and significance of dropping the gun because that was the weapon Lola was shot with. There is a shot held for a long time of Lola lying of the ground until the screen fade out into a red screen- this is unusual and could signify blood, love and passion. The red screen also relates to the red telephone, Lola's red hair and the red bag full money. To conclude sound and editing were used in many ways to create meaning for the audience in 'Run Lola Run', from contrapuntal sound used to contrast with what the audience sees on the screen to give the image a different look or feeling and diegetic sound effects that can be symbolic to the story line. To fast cuts that last around one second or less to show tension and how quick paced the storyline is. Word Count: 1,734 ...read more.