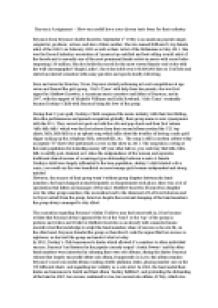 How successful have your chosen texts been for their industry. (On Beyonce)

ï»¿Beyoncé Assignment – How successful have your chosen texts been for their industry. Beyonce (born Beyonce Giselle Knowles, September 4th 1981) is an american pop/rnb singer, songwriter, producer, actress, and also a future mother. She was named Billboard’s top female artist of the 2000’s in Feburary 2009 as well as their Artist of the Millenium in May 2011. She was the Record Industrys association of America top certified and best-selling overall artist of the decade and is currently one of the most prominent female artists in music with record sales surpassing 130 million. She also holds the record for the most viewed female viral video with her well-choreographed ‘Single Ladies’, the video holds over 100,000,000 hits on YouTube and started an internet sensation with many parodies and spoofs shortly following. Born and raised in Houston, Texas, Beyoncé started performing in local competitions at age seven and formed the girls group, ‘Girl’s Tyme’ with help from her parents, she was first signed by Matthew Knowles, a American music executive and father of Beyonce, and in 1997, with the support of Michelle Williams and Kelly Rowland, ‘Girls Tyme’ eventually became Destinys Child with Beyoncé being the bow of the group. During their 9 year spell, Destinys Child conquered the music industry with their hard hitting, diva-like performances and gained recognition globally, their group name is now synonymous with the 90’s. They carved out spots on both the r&b and pop charts and their first release ‘bills bills bills’ which was the first release from ...read more.

set role in the performance and there was much confusion around this, it was speculated that Beyoncé set up to embarrass Tricky as he made negative comments on jay-z playing at Glastonbury in 2008, the theory was that Beyoncé and jay z were aware of these comments, and as revenge, Tricky was asked to perform a massive attack medley (the group tricky was in) on stage, but his cue never came in and this ultimately made him look disconcerted and disoriented, if this is true this could maybe display the ruthlessness of Beyoncé to get revenge in such a petty way, I think this is more Sasha Fierce in action rather than Beyoncé Knowles and this move could also display her cutting edge business side as well. Glastonbury was also aired live on the BBC, the airing attracted 18.9 million viewers, these figures are the highest it’s been for Glastonbury so this marked a milestone for Glastonbury and demonstrated the amount of talent in the line-up. Special filming techniques were used to give the TV viewers a genuine Glastonbury experience, certain filming measures were used to produce such a feeling, such as shots over the shoulder of Beyoncé, there was shot showing the outskirts of the arena which gave the viewer an idea of the masses of people that were there and the power the performance included. Some shots were close-ups of the audience, having a good time, the majority of the fans shown were female, which shows the target audience and the importance and independence of women which is a subject Beyoncé sings about generally in her songs. ...read more.

Videophone which features on ‘I am.. Sacha Fierce’ seems to be the epitome of this alter ego, the song features sexy clothing, with a considerable amount of cleavage showing in many shots, the song also features a lot of exaggerated gun play, this is a dangerous move for Beyoncé as this could glorify guns to influential children, this also odd as normally weapons aren’t acceptable in music videos with rap stars for example so for this to pass censorship could suggest that Beyoncé are in huge control of the music industry and that she is in much power. To conclude, Beyoncé’s success has been phenomenal over the decade, critics claiming her to be the queen of R&B, I think that Beyoncé being at a position of power with the music industry (her place with jay-z) offers her to succeed even further after her R&B artist expires to a prosperous job outside that certain field, I do think also that Beyoncé has influenced many young teens negatively through her music and videos, with her constantly relying on suggestive and sexy dance moves in her videos connects her looks to her success, this adds to the list of attributes women need to be deemed as beautiful, big butts etc. However, Beyoncé offers young teens relatively good life advice in her songs, in Single Ladies she promotes just having a good time after breaking up with someone who didn’t want to make a commitment but is agitated when she talks to other men, the handful of songs she has which do offer sound advice nearly makes up for the negatives she influenced to the world. ...read more.