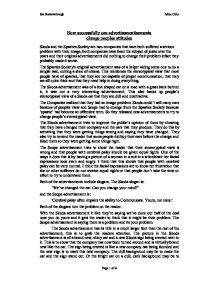 How successfully can advertisementisements change peoples attitudes Skoda and the Spastics Society are two companies that have both suffered a serious problem with their image, both companies have been the subject of jokes over the years and their original advertisements did nothing to change their problem infact they probably made it worse. The Spastics Society's original advertisement was of a helper aiding some one to do a simple task, cutting a slice of cheese. This reinforces the stereotypical view that most people have of spastics, that they are not capable of proper communication, that they are all quite thick and that they need help in doing everything. The Skoda advertisement was of a box shaped car on a road with a grass bank behind it, it was not a very interesting advertisement. This also backs up people's stereotypical view of a Skoda car that they are dull and unattractive. The Companies realised that they had an image problem. Skoda could't sell many cars because of peoples view and Scope had to change from the Spastics Society because 'spastic' had become an offensive term. So they released new advertisements to try to change people's stereotypical view. The Skoda advertisement tries to improve the public's opinion of them by showing that they have changed their company and the cars that they produce. ...read more.

Being too inward-looking does not sound like it is a very bad thing where as if they had said We were too self-centred this makes us feel worse about them and think "can they have changed that much". The last two sections are called 'The change' and 'The evidence' so it tells the reader it has changed and then backs it up. In the section called 'The Change' there are some very powerful words like 'revolutionised' and 'revised' and 'scrutinised'. The word 'revolutionised' is used because it makes it seem like Skoda have drastically changed. Scrutinised was used because it makes it seem like Skoda have looked at every last detail and got everything as good as it gets and revised was used because it seems like they have checked over everything and it wasn't easy. The last section repeats the word 'expect', for example 'It doesn't look the way you'd expect a Skoda to look. It doesn't feel the way you'd expect a Skoda to feel' The purpose of this is to try and change the reader's stereotypical image of what they expect a Skoda car to be like and convince the reader that Skoda cars are better than what the reader would expect. Throughout the Skoda advertisement the company refers to itself as 'we'. ...read more.

The image on the Scope advertisement is of a woman in a wheelchair wearing a suit, which shows that a person with cerebral palsy can be as normal as everyone else. The picture in the Skoda advertisement is of a brand new, shiny car and a new Skoda sign being erected next to it. This is to show that the company has now been turned around and is virtually brand new like the car. The sign being erected is like a new company has being founded and the new sign is to mark this new company. The dull background may be to make the car and the sign stand out. Or the bright car on a dull, dark background may be to represent the light at the end of the tunnel like Skoda has had a bad past like a dark tunnel but they have now turned around and there is light at the end of the tunnel, they are looking forward to a bright future. I believe that the advertisements are affective because the Skoda advertisement really has made me believe that they have improved as a company. The main reason for this is probably because of the J.D Power customer survey and because they have the backing of Volkswagen which has invested so much money into the company. Also the language used in the advertisement makes them seem confident of a good future. ?? ?? ?? ?? Joe Barrowclough Miss Cole Page 1 of 3 ...read more.