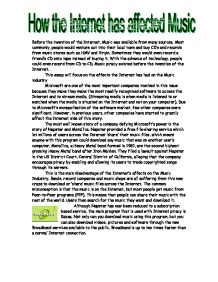 How the internet has affected Music.

Before the invention of the Internet, Music was available from many sources. Most commonly, people would venture out into their local town and buy CD's and records from music stores such as HMV and Virgin. Sometimes they would even record a friend's CD onto tape instead of buying it. With the advance of technology, people could even record from CD to CD. Music piracy existed before the invention of the Internet. This essay will focus on the effects the Internet has had on the Music industry Microsoft are one of the most important companies involved in this issue because they make they make the most readily recognised software to access the Internet and to stream media. (Streaming media is when media is listened to or watched when the media is situated on the Internet and not on your computer). Due to Microsoft's monopolisation of the software market, few other companies were significant. However, in previous years, other companies have started to greatly affect the Internet side of this story. ...read more.

Although Napster has now been reduced to a subscription based service, the main program that is used with Internet piracy is Kazaa. Not only can you download music using this program, but you can also download videos, pictures and software through the new Broadband services available to the public. Broadband is up to ten times faster than a normal Internet connection. As you can see from above, you can find hundreds of files to download, some with a download time of only 32 seconds for one whole song. If I can draw your attention to the magnified section of the picture, you can see there was over 3 million users sharing their files at that point in time. This is the reality of the Internet; people download albums instead of buying them, which severely damages the music industry. However, before the invention of file sharing programs, and before Windows 98, the Music Industry was beginning to be helped by the Internet Music Companies were the first to capitalise on the new medium to advertise their company. ...read more.

This is both an advantage and a disadvantage for the Music Industry. It is positive for the consumers and the artists, because their material is easy to buy. Conversely, it is a disadvantage for music stores because people will simply stay at home and buy music. Bands have a lot to gain from the Internet. They can promote their band by making a website full of details, pictures, news and event dates, and even samples of the band's music. This draws larger audiences for bands and they can also be 'discovered' by record companies who have seen their website. A further advantage is that bands can save money while controlling their CD sales. A band can record their own music in a studio and then distribute it themselves, therefore cutting out the publishing costs. Finally, to the present day, where connection speeds to the Internet are rising, and the number of people sharing music is soaring. How will the Music Industry survive? Microsoft could hold the key. It is rumoured that the next version of Windows will only play media that has been created on your computer, stopping the file sharing craze dead in its tracks. Is it true? Only time will tell. ...read more.