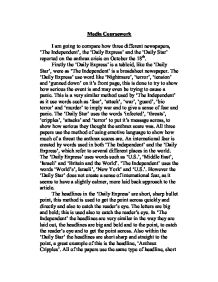 Media Coursework I am going to compare how three different newspapers, 'The Independent', the 'Daily Express' and the 'Daily Star' reported on the anthrax crisis on October the 18th. Firstly the 'Daily Express' is a tabloid, like the 'Daily Star', were as 'The Independent' is a broadsheet newspaper. The 'Daily Express' use word like 'Nightmare', 'terror', 'tension' and 'gunned down' on it's front page, this is done to try to show how serious the event is and may even be trying to cause a panic. This is a very similar method used by 'The Independent' as it use words such as 'fear', 'attack', 'war', 'guard', 'bio terror' and 'murder' to imply war and to give a sense of fear and panic. The 'Daily Star' uses the words 'infected', 'threats', 'cripples', 'attacks' and 'terror' to put it's message across, to show how serious they thought the anthrax scare was. ...read more.

In the 'Daily Star' however there is no mention of the anthrax story on the front page, as it is covered by celebrity gossip, this may be because of the audience the 'Daily Star' is aimed at may be more interested in gossip than news about a bio war. Out of the three papers I fell that the 'Daily Express' and 'The Independent' are aimed at the same sorts of people, people who want to know what's going on in the world, rather than celebrity gossip, were as the 'Daily Star' is aimed at the sorts of people who want to know more about what's happening in celebrity's lives, rather than what is going on in the world, and I have proved this by pointing out and proving many differences and likenesses. ...read more.