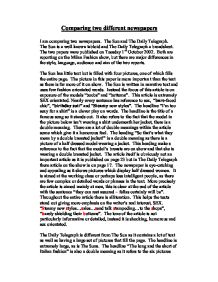 Comparing two different newspapers I am comparing two newspapers. The Sun and The Daily Telegraph. The Sun is a well known tabloid and The Daily Telegraph a broadsheet. The two papers were published on Tuesday 1st October 2002. Both are reporting on the Milan Fashion show, but there are major differences in the style, language, audience and aim of the two reports. The Sun has little text but is filled with four pictures, one of which fills the entire page. The picture in this paper is more important than the text as there is far more of it on show. The Sun is written in narrative text and uses few fashion orientated words. Instead the focus of this article is on exposure of the models "b***s" and "bottoms". This article is extremely s*x orientated. Nearly every sentence has reference to s*x, "bare-faced chic", "birthday suit" and "Steamy new styles". The headline "I'm too sexy for a shirt" is a clever play on words. ...read more.

Throughout the entire article there is alliteration. This helps the texts stand out giving more emphasis on the writer's real interest, s*x. "Steamy new styles...sales...send talk stampeding...to the shops", "barely shielding their bottoms". The tone of the article is not particularly informative or detailed, instead it is shocking, humorous and s*x orientated. The Daily Telegraph is different from The Sun as it contains a lot of text as well as having a large set of pictures that fill the page. The headline is extremely large, as is The Suns. The headline "The long and the short of Italian fashion" is also a double meaning as it refers to the six pictures below which show three models in long dresses and three in short. The text in The Daily Telegraph is broken up more than The Suns which is two short block paragraphs. The pictures are of a more fashionable nature, containing models exposing nothing more than their arms and legs. The captions under the pictures refer to the designers and the show rather than models, showing that the focus of this article is ...read more.