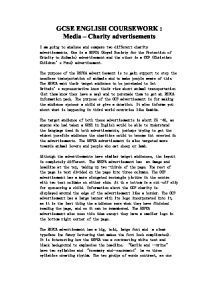 I am going to analyse and compare two different charity advertisements. One is a RSPCA (Royal Society for the Protection of Cruelty to Animals) advertisement and the other is a CCF (Christian Children's Fund) advertisement.

A short sentence, "at least until the law is changed," is used for effect. It also gives the change in subject a sharp transition so it is noticed. "...there is still time to let her [Mrs.Shephard] know your views..." involves the audience so they are kept hooked until the end of the end of the advertisement. In the next paragraph there is only one short sentence, "Which is why we need your help," renewing the audience involvement by using, "We" and "your," and making the sentence stand out. In the last paragraph a clever pun (a play on words) is used, "Perhaps we can then persuade Mrs.Shephard to look after our sheep." Mrs.Shepheard's name is similar to shepherd- a person who looks after sheep; and coincidently she is fighting for sheep's rights. The pun provides a quick and funny, rounded ending. A small logo is placed at the end of the text, as it is the last thing the reader sees on the page and makes one remember the charity. There is a registered charity number so you know the charity is real and your money is not swindled by a fraud as this will make members of the audience insecure about donations and/or support. The text on the CCF advertisement however, answers the rhetorical question of the title. ...read more.

Not only is Gambia a third world country but also others like Mozambique are even worse. There are millions of people in poverty and lots of help is needed to overcome this problem. The picture of Amie is more successful than the sheep as she is female and is stereotyped as the weaker s*x. You could argue at least the sheep get food and do not starve unlike Amie. The CCF advertisement has a better purposeful layout as the headline and text is aligned so you have to look at Amie when reading the headline and when you start reading the right side column form the left side column. The RSCPA has the better headline as the contrasting colours work well and the actual headline is one-thirds of the page attracting awareness, although the CCF headline is also good. The CCF advertisement uses more presentational devices that the RSPCA advertisement. The CCF advertisement does not mention money a lot and therefore is not off-putting. The main problem with charity advertisements nowadays is compassion fatigue especially the picture of Amie as we see so many children like her bombarded in the media. Overall, I think both advertisements are as good as each other. I would give money to the CCF, as most people would put humans before animals. Although the RSPCA beats the CCF advertisement head-to-head on certain aspects, the CCF wins on more influencing aspects such as the layout, the headline and the picture. ...read more.