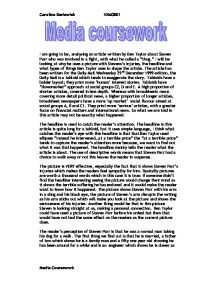 I am going to be, analysing an article written by Ben Taylor about Steven Parr who was involved in a fight, with what he called a thug. I will be looking at why he uses a picture with Stevenss injuries, the headline and what types of things Ben T

I am going to be, analysing an article written by Ben Taylor about Steven Parr who was involved in a fight, with what he called a "thug." I will be looking at why he uses a picture with Stevens's injuries, the headline and what types of things Ben Taylor uses to shape the article. The article has been written for the Daily Mail Wednesday 29th December 1999 edition, the Daily Mail is a tabloid which tends to exaggerate the story. Tabloids have a bolder layout; they print more 'human' interest stories. Tabloids have "downmarket" approach at social groups C2, D and E. A high proportion of shorter articles, covered in less depth. Whereas with broadsheets more covering more detail political news, a higher proportion of longer articles, broadsheet newspapers have a more 'up market' social flavour aimed at social groups A, B and C1. They print more 'serious' articles, with a greater focus on financial matters and international news. ...read more.

Ben Taylor could have used a picture of Steven Parr before his ordeal but then that would have not had the same effect on the readers as the current picture does. The reader's perception of Steven Parr is that he was a normal man taking his dog for a walk. The first thing we find out is that he is married, a father of two which shows he is a family man and a fifty one year old showing he has been around for a while and is an engineer which shows he is clever as he would need qualifications. Steven Parr comes along as a brave man who wasn't looking for any trouble. He acted with good intentions and was punished for it. He could have been one of our parents. We are given quotations from police, Steven Parr himself, his cousin Dennis, wife Jennifer, daughter Suzanne and son Matthew these quotes are very biased so there will be nothing to argue against the idea that he is a good person, "he would always help in an emergency." ...read more.

The quote from the home secretary is used by the newspaper to show that the government are quite useless when it comes to keeping our streets safe, he tells use that "if we don't do not intervene who will?" When people read this they will not go out and intervene because they don't want to end up like Steven Parr beaten senseless. The Daily Mail in this article is anti government as they are implying that we pay taxes for the police yet we are expected to do their job and get beaten up for it. What was written just goes to show that even doing the right thing has its consequences just like it did for Steven Parr. Reporters use many different techniques to sway our view of the events they tell us. In this report Ben Taylor has given us facts about what happened to Steven Parr but he has also influenced our opinion about the events. Caroline Deriawish 10MORE1 Media Coursework ...read more.