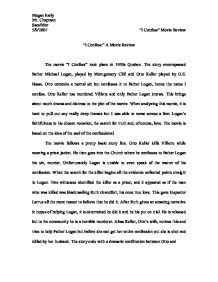 "I Confess:" A Movie Review The movie "I Confess" took place in 1950s Quebec. The story encompassed Father Michael Logan, played by Montgomery Clift and Otto Keller played by O.E. Hasse. Otto commits a mortal sin but confesses it to Father Logan, hence the name I confess. Otto Keller has murdered Villette and only Father Logan knows. This brings about much drama and distress to the plot of the movie. When analyzing this movie, it is hard to pull out any really deep themes but I was able to come across a few: Logan's faithfulness to his chosen vocation, the search for truth and, of course, love. The movie is based on the idea of the seal of the confessional. The movie follows a pretty basic story line. Otto Keller kills Villette while wearing a priest jacket. He then goes into the Church where he confesses to Father Logan his sin, murder. Unfortunately Logan is unable to even speak of the matter of his confession. When the search for the killer begins all the evidence collected points straight to Logan. ...read more.

Logan begins to wonder if they will ever find out that Otto really did it, or if he should go on and tell in hopes of saving his life. The movie comes to a dramatic end when finally the truth becomes public. Otto shoots and kills his wife after she tells Inspector Larrue that Logan was really innocent. The movie also is based heavily on the search for the truth. Inspector Larrue is searching only for the truth, who did it and why, but he is only looking on the surface of things. He fails to dig deeper into problems, thus he pins Logan as the killer. Larrue uses the witnesses to basically solve his case. The search for truth is imperative to the movie because somebody (Father Logan) knows the truth and is unable to tell it. He can help them get to the truth but because Inspector Larrue fails to look deeper into things this does not happen. Love, the word alone opens many doors. Love is definitely seen in Father Logan. He shows his love for Otto by not giving him away even after Otto doesn't take the blame for the killing of Villette. ...read more.

I also saw the symbolism between him and God with how well Logan handled the fact that he might be imprisoned. As far as acting goes, Montgomery Clift played the role of Father Logan well. He was able to not only create but maintain that priestly attitude throughout the entire film. I was very impressed with his stature and his looks. Ruth Grandfort was a good actress but lacked the ability to hold her attitude through the entire film. She was very storng with emotion during her narrative about her meeting with Father Logan. I felt the strongest actor of the film would have to be Alma Keller. She didn't say much but I think that is what made her the strongest. Her emotions could be easily detected, and you could sense her sorrow for what Father Logan was going through. Otto Keller, strong actor, but I felt he could have played the role more. He just didn't have the pizzazz that Clift or Baxter where able to add to their characters. In conclusion, I would like to say I really enjoyed this movie and enjoyed Hitchcocks ability to stick to the theme. Megan Early Mr. Chapman Sacs/Mor 5/9/2007 "I Confess" Movie Review ...read more.