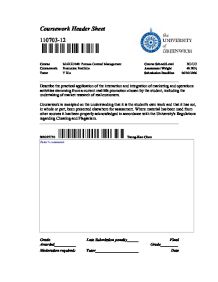 I feel that Microsoft is taking a slightly different approach to Playstation, Nintendo and the old Xbox where the adverts are much more youth orientate; they are now trying to appeal for a wider audience

Coursework Header Sheet 110703-12 Course MARK1040: Process Centred Management Course School/Level BU/UG Coursework Promotion Portfolio Assessment Weight 40.00% Tutor Y Xie Submission Deadline 06/02/2006 Describe the practical application of the interaction and integration of marketing and operations activities stemming from a current real-life promotion chosen by the student, including the undertaking of market research of real customers. Coursework is receipted on the understanding that it is the student's own work and that it has not, in whole or part, been presented elsewhere for assessment. Where material has been used from other sources it has been properly acknowledged in accordance with the University's Regulations regarding Cheating and Plagiarism. 000295730 Tsung-Han Chou Tutor's comments Grade Awarded___________ Late Submission penalty______ Final Grade_________ Moderation required: yes/no Tutor______________________ Date _______________ Pro-forma A Purpose of Promotional Activity Name of Company Microsoft Name/ description of promoted Product/ Service XBOX 360 - it is a new entertainment system with features such as video gaming, wireless controller and DVD movie play back, digital music, photo etc. Is this a new or existing product/ service? This is a newest version of old XBOX and there are many other similar products within the market such as the Nintendo Gamecube and Playstation. What are the key products and or service attributes? * Xbox 360 console * 20GB detachable hard drive * High-definition AV cables * Ethernet cable * Xbox 360 Media Remote Control (limited time) * Detachable faceplate * Wireless controller * Wireless Xbox Live headset * Xbox Live Silver membership (www.xbox.co.uk) Xbox Live is the most innovative feature of Xbox. A built-in Ethernet port allows users to connect their system to a broadband connection for access to the new Xbox Live Silver. New features such as live one-on-one voice/video chat, messaging and downloading etc making an entertainment experience closer to that of television or cinema. This allows more approachability for the Xbox and also creates a huge draw to more casual gamers, forming a wider audience. ...read more.

Pro-forma B Effectiveness of promotional activity Assumed required Marcoms outcome (summary from form A) Changing the company's public image. Use innovation to reshape people's attitude and buying behaviour. Assumed required Marketing outcome (summary from form A) There are two goals of Microsoft for Xbox 360: 1. Gaining market share 2. Diversification Type of research undertaken (brief description) I have chosen to use quantitative research method, where questionnaires consisting of 10 questions will be handed out to a sample size of 30 people within the assumed target age group. I think this will provide enough information to give me a perceptive view of the marketing effectiveness. The research will be undertaken in "Game shop" in Canary Wharf shopping during the weekend because otherwise most people will be at work or school. Purpose of research This research is aimed to examine the effectiveness of Xbox 360's advertising on the assumed target segment. I will examine how well the targeted consumers have received the marketing message and their response to various marketing stimuli. Conclusions drawn from research Most purchasers of Xbox 360 are male between the ages of 18-35. This more or less confirmed the assumed focus target group - the male hardcore gamers where most of them learned the launch of 360 online. Most people find no clear promotional message. A minority think the TV ad promotes high-resolution gaming, which in my opinion is coherent with the company's intended message for UK. The majority think the adverts are of average to good; the creativity within the ads aroused their curiosity to find out more about the console. Overall I think the advertising is effective because quite a few people who are aware of the promotion end up buying Xbox. Obviously the pop culture of the ads is successful in drawing the required attention. For such an expensive console people often conduct adequate self-research before purchasing. As long as the functions and new features have an appeal, it is most likely to result in a purchase. ...read more.