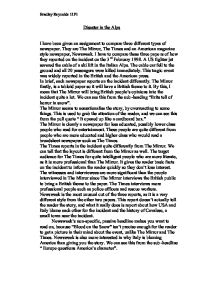 I have been given an assignment to compare three different types of newspaper. They are The Mirror, The Times and an American magazine style newspaper, Newsweek.

Disaster in the Alps I have been given an assignment to compare three different types of newspaper. They are The Mirror, The Times and an American magazine style newspaper, Newsweek. I have to compare these three papers of how they reported on the incident on the 3rd February 1998. A US fighter jet severed the cable of a ski lift in the Italian Alps. The cable car fell to the ground and all 20 passengers were killed immediately. This tragic event was widely reported in the British and the American press. In brief, each newspaper reports on the incident differently. The Mirror firstly, is a tabloid paper so it will have a British theme to it. By this, I mean that The Mirror will bring British people's opinions into the incident quite a lot. We can see this from the sub-heading "Brits tell of horror in snow". The Mirror seems to sensationalise the story, by overreacting to some things. This is used to grab the attention of the reader, and we can see this from the pull quote " It opened up like a cardboard box." The Mirror is clearly a newspaper for less educated, possibly lower class people who read for entertainment. These people are quite different from people who are more educated and higher class who would read a broadsheet newspaper such as The Times. ...read more.

First of all, The Mirror uses descriptive language and many active verbs to describe the incident. Some active verb used are "sliced" and "plunged". These active verbs standout and impact the reader to grab attention. The Mirror has an unrelated sub-headline. This is so the reader gets the gist of the story and so they don't have to read the whole thing to get the story. Straight away, The Mirror notes that it was "an American warplane", to give them the blame. The Mirror interviews many people and eyewitnesses. Most of the people interviewed were "worried", "amazed" and "angry". By mentioning these statements, The Mirror gives us a negative feel towards the Americans. The Mirror is a typical, British, tabloid newspaper and can usually sensationalise the story. It likes to grab the reader's attention by using big photos and images and by using captions smartly such as "Death Car". The Mirror is quite informal, friendly and has a comprehensive style. The Mirror also likes to seeks reactions from the British public and seek personal details as well. We can see because it interviewed a "British couple". The Mirror enjoys concentrating on people's feelings, as many were "worried", "amazed" and "angry". The Times uses more passive verbs such as "cuts" to report on the incident. ...read more.

Newsweek is saying that the people of Cavalese are moaning and groaning by using the word "griped". It tones down the event by using plain language. We can see this from "US fighter jet clipped two cables". This makes it sound like an accident, and it doesn't use an active verb like "sliced". Newsweek doesn't want to blame itself so it obviously blames Italy because "the pilot's flight plan...had been cleared by Italian authorities." Even though Newsweek points out that Americas were in the wrong in some cases, like "The minimum cruising altitude.... in Italy is 500 feet", in the end, it all adds up and shows that Italy are to blame. Also, Newsweek points out that Italy could be bitter towards the US due to anti-Americanism. In my opinion, the readers of Newsweek would be quite intelligent and are able to accept opinions of other people. Maybe someone like a lawyer would read it. In conclusion, I feel that the newspaper that reports best on the incident is The Times. I think that it is the most professional newspaper and has the most varied use of language. Its laid out well and the pictures give you a quick view of the event. The Times doesn't seem to blame either the US or Italy so it is neutral, similar to the language. Its quick headline tells you what happened and makes you want to read on, and as the reporter is in Rome, it sounds more professional. Bradley Reynolds 11P1 ...read more.