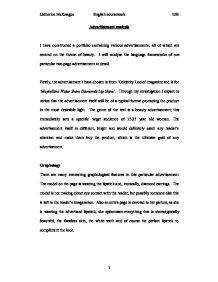 I have constructed a portfolio containing various advertisements, all of which are centred on the theme of beauty. I will analyse the language frameworks of one particular two-page advertisement in detail.

Advertisement analysis I have constructed a portfolio containing various advertisements, all of which are centred on the theme of beauty. I will analyse the language frameworks of one particular two-page advertisement in detail. Firstly, the advertisement I have chosen is from 'Celebrity Looks' magazine and is for 'Maybelline Water Shine Diamonds Lip Shine'. Through my investigation I expect to notice that the advertisement itself will be of a typical format promoting the product in the most desirable light. The genre of the text is a beauty advertisement; this immediately sets a specific target audience of 15-35 year old women. The advertisement itself is different, bright and would definitely catch any reader's attention and make them buy the product, which is the ultimate goal of any advertisement. Graphology There are many interesting graphological features in this particular advertisement. The model on the page is wearing the lipstick and, ironically, diamond earrings. The model is not making direct eye contact with the reader, but possibly someone else this is left to the reader's imagination. Also an entire page is devoted to her picture, as she is wearing the advertised lipstick, she epitomises everything that is stereotypically beautiful, the flawless skin, the white teeth and of course the perfect lipstick to compliment the look. The brand name is printed across the two-page spread in a large size 36 font, which is blue/navy, escaping from the predictable black this is a softer, less formal and more feminine approach. ...read more.

This helps to persuade the reader that the product will work. The latter two words are verbs which indicate what the lipstick actually does that sets it apart from the rest. Lexical cohesion has been maintained throughout the text. The words used are in general from the same semantic field. Most of the words in the passage are free morphemes, e.g. 'new', 'create', 'look', 'shine' etc. All the rest tend to be inflectional morphemes e.g., 'shimmering', 'enriched', 'sparkling' and 'diamonds'. These inflectional morphemes simply indicate tense and mark it for plural. This greatly simplifies the structure of the text and makes it easy for almost any reader to grasp. The words 'create' and 'new' indicate something innovative and never seen before, the reader is lured into a feeling of the unexpected and that anything is possible with this lipstick. Again the actual company name, 'Maybelline' is very interesting as it is composed of two different, overlapping words. 'Maybe' is an adjective meaning perhaps or possibly and 'belle' is a French adjective giving an English noun meaning the most beautiful woman especially at a function or event. This brings instantly to mind the clich�, 'she is the belle of the ball', which is every woman's ultimate wish. Therefore when analysed the word means perhaps the most beautiful woman. In other words it is not promising anything but simply suggesting the power of beauty which the product holds. ...read more.

The reader therefore will begin to believe that the product is fashionable and indispensable and also immediate and new. There are no aphorisms or interjections, keeping the tone succinct and to the point. The clause patterns are however rather unusual and complicated yet all quite similar. In the first sentence the pattern is verb ('create'), complement ('wet look effect with shimmering') and then the subject ('diamond shine'). The second sentence again begins with a verb in the passive voice ('enriched') followed by the object ('tiny sparkling particles') and lastly the complement ('reflect light like a sea of diamonds') The final sentence again begins with a verb, ('smooth, moisturising and non-sticky') and then the object ('sparkling lipstick') and lastly the complement ('14 precious diamond shine shades'). The punctuation is very traditional with full stops, one comma and one exclamation mark throughout the two-page advertisement making it seem rational and logical. These interesting grammatical features all add to the advertisement's success in captivating the reader and stimulating her to read on Conclusion I feel that this advertisement captures all of the various language frameworks we have studied, which is why I only chose only this advertisement to analyse. The layout of the advertisement is very clever and meticulously constructed. The language is extremely well utilised to sell the product and its interpretation and associations all add to its original style. There is no doubt that the advertisement on the double page spread is extremely catching and unforgettable. 1850 Catherine McKeague English coursework 13B 1 ...read more.