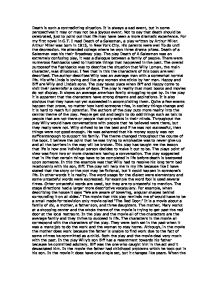 I read Death of a Salesman, a play written by Arthur Miller.

Death is such a contradicting situation. It is always a sad event, but in some perspectives it may or may not be a joyous event. Not to say that death should be celebrated, just to point out that life may have been a more dramatic experience. For my first novel in G.T. I read Death of a Salesman, a play written by Arthur Miller. Arthur Miller was born in 1915, in New York City. His parents were well To do until the depression. He attended college where he won three drama prizes. Death of a Salesman was his their Broadway play. The play Death of A Salesman was an extremely confusing play, it was a dialogue between a family of people. There were numerous flashbacks used to illustrate things that happened in the past. The overall purposeof the flashbacks was to describe the situation that w***y Loman, the main character, was dillusional. I feel that in this the characters of this book are well described. ...read more.

Throughout the play w***y would have conversations with people that he believed were there, but they really were not. w***y strived to be the best and if he was not successful, then things were not good enough. He was ashamed that his money supply was not sufficentenough to support his family. The theme changed throughout the course of the book. I believe the point that he was trying to emphasize was to never give up and all the barriers in the way will be broken. This play has taught me the lesson that life is how one individual person decides to make it out to be. The plays point of view was from two or more characters having a conversation. The play suggested that in life that certain things have to be completed in life before death is bestowed upon someone. In this the example was that w***y had to resolve his long term bad relationship with his son, Biff. ...read more.

The characters in the movie all correspond with the characters of the play. They were both set in the past when it was a mans job to do the work and the woman to stay home. Although, in the movie the mother does work because the father is unable to find work due to the fact of some crimes he committed as a child. Both the play and the movie deal very much with the past. In the play w***y's son Biff has a resentment towards his father because he commited adultery. Biff was the one who caught him in the act and it devastated him. In the movie the father had childhood problems which he took out in his son. In the movie it does have one single set, but it changes like years. When the father and son grow up there is a strong animosity between them that might make there relationship be lost forever. This was an interesting play that had many high points. I enjoyed it and my favorite part about it was the reality that it displayed. Families really do have problems and this play illustrated this. ...read more.