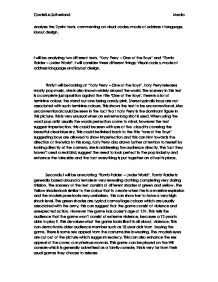 I will be analysing two different texts, Katy Perry One of the Boys and Tomb Raider Under World. I will consider three different things; Visual codes, mode of address language and layout design.

Analyse the 2 print texts, commenting on visual codes, mode of address + language, layout design. I will be analysing two different texts, "Katy Perry - One of the Boys" and "Tomb Raider - Under World". I will consider three different things; Visual codes, mode of address language and layout design. Firstly I will be looking at "Katy Perry - One of the Boys". Katy Perry releases mostly pop music, she is also known widely around the world. The scenery in this text is a complete juxtaposition against the title 'One of the Boys', there is a lot of feminine colour, the stand out one being candy pink. Stereotypically boys are not associated with such feminine colours. This shows the text to be unconventional. ...read more.

The fact they haven't used a real bird, suggest the need to look perfect in the pop industry and enhance the fake side and the fact everything is put together and has its place. Secondly I will be annotating "Tomb Raider - Under World". Tomb Raider is generally based around a female in very revealing clothing completing very daring mission. The scenery of the text consists of different shades of green and yellow. The Yellow shades look similar to the colour that is create when the is a massive explosion and the models pose looks very unshaken, this can show her to have a very high shock level. ...read more.

have analysed both text and in conclusion, "Katy Perry - One of the Boys" is unconventional, this is shown through the scenery and camera angles. It also suggests imperfection through the scenery and use of text. This text is goes against the normal. This is probably to engage the audience. "Tomb Raider - Under World" sends out mixed signals because of the age that is allowed to play this game and the violence that is suggested is in this game because of props and scenery. Also the fact it is playable on the Wii console would usually mean it is a family game. Both texts are unusual in different ways, but this in fact makes them stand out more. ?? ?? ?? ?? Cordell.A.Sutherland Media ...read more.