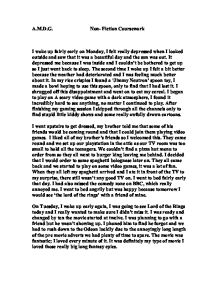 I woke up fairly early on Monday, I felt really depressed when I looked outside and saw that it was a beautiful day and the sun was out.

A.M.D.G. Non- Fiction Coursework I woke up fairly early on Monday, I felt really depressed when I looked outside and saw that it was a beautiful day and the sun was out. It depressed me because I was inside and I couldn't be bothered to get up so I just went back to sleep. The second time I woke up I felt a bit better because the weather had deteriorated and I was feeling much better about it. In my rice crispies I found a 'Jimmy Neutron' spoon toy, I made a bowl hoping to use this spoon, only to find that I had lost it. I shrugged off this disappointment and went on to eat my cereal. I began to play on A scary video game with a dark atmosphere, I found it incredibly hard to see anything, no matter I continued to play. After finishing my gaming session I skipped through all the channels only to find stupid little kiddy shows and some really awfully drawn cartoons. I went upstairs to get dressed, my brother told me that some of his friends would be coming round and that I could join them playing video games. ...read more.

I went to have my breakfast and had a shower I was ready to go to my friend's house. We decided that we'd go and see a movie but we didn't know what. I stayed at his house for a bit and we played on some video games. We headed down into Wimbledon and got something to eat, in center court I found an Akira comic, which I desperately wanted, sadly I didn't have enough money to get it. I vowed to return the next day and purchase it. We went to the Odeon and saw Oceans eleven. I didn't think that it would be that good and was a bit skeptical, I couldn't have been more wrong. The movie was seriously clever I would never of thought in a million years of such a good robbery plan. I was stunned at the twist I would definitely see it again. I went back to my friend's house and he asked if I would stay the night I happily excepted. We had muscles at his house; I hadn't had them for such a long time they tasted really good. ...read more.

I stayed up watching TV until quite late and then went to bed, it took me quite a long time to get to sleep that night. Absolutely nothing happened on Saturday, this had to be the most boring day of the whole half term. All I did was watch TV I didn't feel like doing anything else. Although I had my favorite meal that day spaghetti, I ate until I couldn't eat anymore its my favorite meal. I went to bed and watched Dragon the Bruce Lee movie I've seen it so many times but I never get tired of it. The next day I had to get on with my work and needed to revise some more for my science test, I was dreading today. All I did was work I needed to finish off my English, I had to do six pages of art and my DT luckily I realized that my DT was only in for Wednesday so I left that and got on with my art homework, to my surprise I found that my mum was making banana cake. I rejoiced. I got on with my art and was pretty happy with it. I the revised for my science and then had dinner. I am now typing and am planning to revise some more on my science. L.D.S. ...read more.