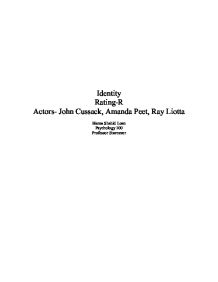 Identity, is a psychological thriller, which keeps the audience riveted till the very end.

Identity Rating-R Actors- John Cussack, Amanda Peet, Ray Liotta Bisma Shahid Loan Psychology 100 Professor Stavnezer Identity, is a psychological thriller, which keeps the audience riveted till the very end. This movie has many twists and turns to it, and right when one thinks that they might be getting some grasp of the story, it shifts gears. The movie opens with a noted psychiatrist mulling over a case in which the defendant had murdered six people, and was trying to plead that he had a psychiatric disorder and was suffering from multiple personality disorder. The scene suddenly shifts to a motel, in which one by one, ten people come to seek shelter against a rainstorm, which has made it impossible to cross the state of Nevada. All sort of communication is cut of because of the rain, so the people are effectively stranded there till the morning. Each of these ten people seems to have some sort of terrible secret, which they are either hiding, or running away from, but their exterior appearances reveal nothing of their inner turmoil's. There is Larry, the motel owner who seems to be extremely harassed and jumpy, Ed a limo driver who seems to know more than an average limousine driver about murders and homicides. There is a newly wed couple, Ginny and Lou, who seem extremely jittery, and the York family, which consisted of an extremely insecure stepfather, his wife who had to take control of the whole situation before she was injured, and her son who had turned towards silence since his father left the family. There was also a hooker, Paris who carried a suitcase full of money and a washed up actress Caroline, whom Ed was driving. Around the same time, a police official is transporting a killer across state lines. All these characters come together on a rainy night in this motel, with nothing in common with each other except that each was born on the May 10th. Then the murders start. ...read more.

They try not to let fear and hysterics get the better of them, and try to carefully assess the situation and try to collect whatever evidence that they can. Ed starts trying to collect whatever evidence that is left and proceeds to comb the whole motel area from one corner, with the police officer combing the other side. They are intent on capturing this elusive murderer who is so methodically killing of so many people. Ed's search bears fruit as he is trying to get through to the authorities but discovers that the police cars radio has been torn from the car. When he rifles through the glove compartment, he comes across two prisoner rap sheets. One of those prisoners is actually the guy who alleges to be the police officer. Ed is stunned speechless, and things take an unexpected turn. Although he is now fearful and has no idea what to do, he thinks of everything with a very rational mind before reaching any sort of conclusion. An interesting person, who plays a significant role throughout the movie, is the hooker Paris who seems to be running away from her past, complete with a suitcase full of cash. She is a very mysterious person who seems to never reveal much about herself. Through out the movie, in varying stages she is called a prostitute or a hooker, because of the way she dresses, which leads the viewer to believe that in actuality she may be one. But not once does she ever acknowledge that herself, so one is led to wonder what she really is, if not a hooker. She seems to be in her late 20's, and in Erikson's stages of psychosocial development, she has issues of intimacy versus isolation. It is during this stage that Erickson had talked about how there is a developing capacity for intimacy, which is the ability in forming emotional and intimate relationships with other people. ...read more.

There is the aspect of the multiple personality disorder that the killer suffers from. This can be tied in with the suppressed memories that he has within him of the childhood abuse he suffered, and how he suffered when his mother left him alone for days on end while she went about her business. These two aspects are interlinked with each other, the suppressed memories seeming to give rise to another personality better equipped to handle these childhood memories which are very painful. The aspects of emotions seem to be tied with the personality of Paris that was also discussed. The two different emotions that are displayed by Paris, and then by Ed and the police officer seem to add a sense of surrealism to the whole movie. Here is a woman who is hysterical after the car containing two people just exploded out of nowhere, and the men who are as scared as she is, seem to be assessing the situation with an air of calculated ness so as to find out who is the perpetrator of these crimes. The emotions of all three of these characters, is of fear, but the assessment and playing out of fear in context of the environmental cues are different. The scared and screaming Paris seems to be in sharp contrast with the earlier picture of Paris, in which she seems to be shunning any sort of intimacy with the fellow guests, preferring instead to keep checking on her money. These feelings of antagonism and wariness seem to give way to a certain degree of intimacy, in which she is trying to soothe the hysterical newly wed, as well as looking after the mute child. All these aspects of the movie seem to mold in together with each other, each aspect seeming to be derived from the other, in an effort to explain the story in its complete context. To explain the madness of a man, with ten different personalities, all of whom are dying one by one, to reveal the true murderer. ...read more.