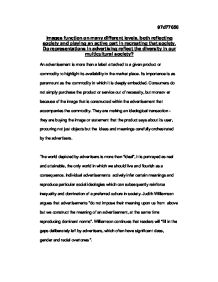 Images function on many different levels, both reflecting society and playing an active part in recreating that society - Do representations in advertising reflect the diversity in our multicultural society?

97d77656 Images function on many different levels, both reflecting society and playing an active part in recreating that society. Do representations in advertising reflect the diversity in our multicultural society? An advertisement is more than a label attached to a given product or commodity to highlight its availability in the market place. Its importance is as paramount as the commodity in which it is deeply embedded. Consumers do not simply purchase the product or service out of necessity, but moreover because of the image that is constructed within the advertisement that accompanies the commodity. They are making an ideological transaction- they are buying the image or statement that the product says about its user, procuring not just objects but the ideas and meanings carefully orchestrated by the advertisers. The world depicted by advertisers is more than "ideal", it is portrayed as real and attainable, the only world in which we should live and flourish as a consequence. Individual advertisements actively infer certain meanings and reproduce particular social ideologies which can subsequently reinforce inequality and domination of a preferred culture in society. Judith Williamson argues that advertisements "do not impose their meaning upon us from above but we construct the meaning of an advertisement, at the same time reproducing dominant norms". Williamson continues that readers will "fill in the gaps deliberately left by advertisers, which often have significant class, gender and racial overtones". ...read more.

Advertisers are keen for the audience to infer this preferred meaning and employ black models, who are celebrated for their emotion in music and dancing, to foreground these connotations. Advertisements for financial institutions illuminated difference again between white and ethnic minority participants. Seventeen per cent of all adverts featuring white participants were for financial institutions, compared to only ten per cent for ethnic minorities. It appears banking is a bastion for white representatives, as advertisers for financial institutions are keen to impress a notion of trust, honesty and sound business acumen. These are attributes not commonly associated with stereotypical images of blacks, often painted as untrustworthy, dishonest and linked to income of illigitimate means. It carries overtones of the purity and cleanliness of being white, instilled not only by advertising but throughout the history of art, literature and cinema. The report also found that the immediate location of ethnic participants in advertisements adhered to several stereotypes. "Black Americans" accounted for eleven per cent of all their appearances in a "Menacing" or "Urban" setting, at least seven per cent greater than any other ethnic group. Seventeen per cent of "Asian" appearances were at "Work" , again greater than any other group. These classifications support the recognised stereotype of the streetwise ghetto gangster and the innate work ethic stereotypically associated with black Americans and Asians respectively. The examination of the role played by ethnic minorities and white participants in advertisements extracted comparable differences. ...read more.

Goffman says of advertisements "One can probably make a significant negative statement about them, namely, that as pictures they are not perceived as peculiar and unnatural". Images projected in advertisements are not innocuous. We are repeatedly invited to read the multi-level meanings of advertisements every day. Cultural representations or misrepresentations can further alienation and oppression via the exclusion of people constructed as different or even inferior. Iain Ramsay comments that "discrimination in consumption markets may be fuelled by cultural stereotypes which may in turn be fuelled by advertising stereotypes". Advertisers skewed reflection of society to satisfy its own capitalist agenda is compounded by its notable neglect of the multi-cultural composition of society. It appears only certain facets of minority culture can penetrate the all-pervasive western, white culture. Ultimately, however, those facets must first be refined, distilled and presented virtuous so as to ever enhance the commercial appeal of the commodity. Advertisements highlight the cultural position of society via subliminal meaning. The current array of advertisements would suggest society's position is firmly on white, western culture, with minority cultures fixed on the periphery. The inherent problem surrounding advertising is that it is regulated under a criteria of "taste", "decency" and "the likelihood to cause offence". This reduces the overwhelming expanse of advertising to that of an abstract. Advertisements are reviewed singularly and thus the broader issues of exclusion, the political histories of some social groups and the conceptualisation of ideologies escapes regulatory criticism. It could be argued that it is the laws and regulation on advertising that first must be addressed before the mindsets of advertisers can ever be realigned. ...read more.