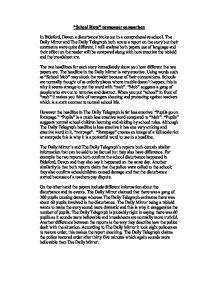 In Bideford, Devon a disturbance broke out in a comprehensive school. The Daily Mirror and The Daily Telegraph both wrote a report on the story but their comments were quite different

"School Riots" newspaper comparison In Bideford, Devon a disturbance broke out in a comprehensive school. The Daily Mirror and The Daily Telegraph both wrote a report on the story but their comments were quite different. I will analyse both papers use of language and their effect on the reader will be compared along with how emotive the tabloid and the broadsheet are. The two headlines for each story immediately show you how different the two papers are. The headline in the Daily Mirror is very emotive. Using words such as "School Mob" may shock the reader because of their connotations. Schools are normally thought of as orderly places where trouble doesn't happen; this is why it seems strange to put the word with "mob". "Mob" suggests a gang of people who are out to terrorise and destruct. When you put "school" in front of "mob" it makes you think of teenagers shouting and protesting against teachers which is a stark contrast to normal school life. However the headline in The Daily Telegraph is far less emotive. "Pupils go on Rampage." "Pupils" is a much less emotive word compared to "Mob". "Pupils" suggests normal school children learning and abiding by school rules. ...read more.