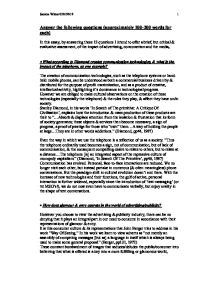 In this essay, by answering these 12 questions I intend to offer a brief, but critical &amp; evaluative assessment, of the impact of advertising, consumerism and the media.

Answer the following questions (approximately 100-200 words for each) In this essay, by answering these 12 questions I intend to offer a brief, but critical & evaluative assessment, of the impact of advertising, consumerism and the media. * What according to Diamond creates communication technologies, & what is the impact of the telephone, as one example? The creation of communication technologies, such as the telephone systems or hand-held mobile phones, can be understood as both a commercial business driven by & distributed for the purpose of profit maximisation, and as a product of creative, intellectual activity, highlighting it's dominance in technological progress. However we are obliged to make cultural observations on the creation of these technologies (especially the telephone) & the roles they play, & affect they have on/in society. Stanley Diamond, in his works 'In Search of The primitive: A Critique Of Civilisation', explains how the introduction & mass production of these products are their to "...Absorb & displace attention from the isolation & frustration that its form of society generates; these objects & services then become necessary, a sign of progress, a proof of prestige for those who "own" them...A way of holding the people at large...They are in other words addictions." (Diamond, pp44, 1987) Even the way in which we use the telephone is a reflection of us as a society. ...read more.

You do not only by an object: You buy a social respect, discrimination, health, beauty, success, power to control your environment. The magic obscures the real sources of general satisfaction because their discovery would involve radical change in the whole common way of life." (Williams, 'The Magic System', pp188/9, 1969) Magic is not a single unified system, but a process, a mythical way of doing things, a transformation of a system. Magic is a tool around which misrepresentation may take place; it always involves a misrepresentation of time in space or of space in time * Who owns the media & how does that affect media information? Most media organisations are often owned by multinational, multi-million pound corporations, that are often involved in a number of business ventures apart from the media. They view the use of media as one component for broader campaigns. Media content can be seen to reflect the ideology of the particular owning corporation, with concentration of ownership & lack of diversity key issues. These corporations "Sell their product to a market, & that market is of course, advertisers." (Chomsky, 'What Makes Mainstream Media Mainstream', pp22, 1997) Commercial TV stations, radio stations & most newspapers receive most or all of their income from advertisers. The media are a means of exposing audiences to advertising, with media corporations selling a product (audiences) ...read more.

Above we have already discussed ownership & ideology of various media & media corporations. But we are often unaware of the power of these media & its connections to shape society or (at least the dominant culture's society) to fit in with the political & economical ideology of the controlling forces. I for one do not want to be subject to what can be fundamentally labelled as brainwashing, to fit into a particular train of thought or belief systems. As globalisation becomes ever more prominent, the role of advertising, consumerism & the media also increases. While consumption has been a part of our history, the level of mass consumption beyond basics is now a fundamental part of our culture. Advertising consistently promotes the myth ideology of consumerism, that we must (or should I say to for a better word, NEED) more & more products in a rapidly expanding world. However without failing to realise that it is just this consistent over absorption of the worlds natural resources, & the ever increasing gap between rich & poor, that is threatening humanity as a whole. We have already done almost irreparable damage to the Worlds resources, yet the media, advertising & consumer ideology fail to report this. For they know that with the decrease in consumption, the whole unstable structure that they have thought for nearly a hundred years to maintain, will be threatened with collapse. ?? ?? ?? ?? 5 1 Jerome Witter 03019019 ...read more.