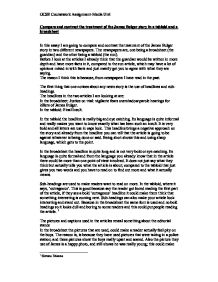 In this essay I am going to compare and contrast the treatment of the James Bulger story in two different newspapers. The newspapers are, one being a broadsheet (the guardian) and the other being a tabloid (the sun).

Compare and contrast the treatment of the James Bulger story in a tabloid and a broadsheet In this essay I am going to compare and contrast the treatment of the James Bulger story in two different newspapers. The newspapers are, one being a broadsheet (the guardian) and the other being a tabloid (the sun). Before I look at the articles I already think that the guardian would be written in more depth and have more facts in it, compared to the sun article, which may have a lot of opinions mixed in with facts and just mainly get you to agree with what they are saying. The reason I think this is because, from newspapers I have read in the past. The first thing that one notices about any news story is the use of headlines and sub-headings. The headlines in the two articles I am looking at are: In the broadsheet: Justice on trial: vigilante fears overshadow parole hearings for killers of James Bulger. In the tabloid: Final Insult. In the tabloid the headline is really big and eye catching. Its language is quite informal and really makes you want to know exactly what has been such an insult. ...read more.

But then having the cheerful picture of James, could make you think he was so young, and make you feel angry. Whereas, in the tabloid, the picture's bring out a totally different feeling. The pictures of Thompson and Venables, show them happy, and I think this could make readers feel angry; as if you picture them with a smile on their face it could make you feel like they don't care about what they have done, and are happy about it. Whereas the James picture is located in-between theirs, so it shows they had power over him and because the picture he does not have a smile shows he was vulnerable and shows him being young. These pictures are there to bring out one feeling, that Thompson and Venables should pay, for their crime. In the broadsheet the picture doesn't take up that much space, but in the tabloid it's like it is the main feature. The captions in the tabloid bring out even more feelings to the picture because of the bold words 'KILLER' 'VICTIM' 'KILLER'. Using the word killer shows that the murder was vicious and could have never been done by accident. The captions in the broadsheet just basically tell you what the picture is of, and doesn't really make you focus on the pictures. ...read more.

the point, whereas the broadsheet is aim at readers of a more higher class and people who want to know the in-depth truth of the story. Both newspapers also make use of different fonts and typographical device. The bold font size of a tabloid attracts the reader to the paper. The tabloid has less writing and a reading age from 8 yrs. The tabloid paper makes the article look more interesting. The quotes are in italics with bold speech marks. The tabloid captions are short, quick and simple. The broadsheet has a much smaller font and more writing. The broadsheet has fewer captions. The text in the broadsheet is surrounding the photos. It has more columns and long sentences. The tabloid is easy to read on a quick journey whereas the broadsheet would take a lot more time to read and has a lot more detail to take in. The fundamental difference between the way the different newspapers treat the story is that in the tabloid I think they are appealing to the right wing and the broadsheet to the left wing. I think the tabloid appeals to more people as there are emotive words which effect the readers feelings and reaction1,2,3s to the article. 1 Simone Etienne 2 Simone Etienne Simone Etienne GCSE Coursework Assignment-Media Unit ...read more.