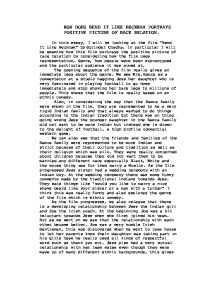 In this essay, I will be looking at the film

HOW DOES BEND IT LIKE BECKHAM PORTRAYS POSITIVE PICTURE OF RACE RELATION. In this essay, I will be looking at the film "Bend It Like Beckham" by Gurinder Chadha. In particular I will be examine how this film portrays the positive picture of race relation by considering how the film uses representation, Genre, how people were been stereotyped and the particular audience it was aimed at. The opening sequence of the film really gives an immediate idea about the genre. We see Mrs.Bamra as a commentator at a studio nagging Jess her daughter who is very fascinated in playing football to go home immediately and stop showing her bare legs to millions of people. This shows that the film is really based on an ethnic comedy. ...read more.

They were really concerned about children because they did not want them to be married any different race especially Black, White and the worse thing was for them marry a Muslim. As the film progressed Jess sister had a wedding ceremony with an Indian boy. At the wedding ceremony there was some funny comments made by the traditional Indians towards Jess. They said things like "would you like to marry a nice shave beard like your sister or a man with a turban" I think this was really funny and also explores the genre of the film which is ethnic comedy. As the film progresses, we also release that there is a developing relationship between Jess the Indian girl and Joe the Irish coach. At the beginning Joe was a bit reluctant towards Jess when she first joined his team. ...read more.

The director really made a positive point of the Indian culture by the way the Indian people were dancing, the kind of food the Bamra family were eating which was agloo and also the background music used when ever the house of the Bamra family house were shown. The film also celebrates the British culture by the openness of sexuality such as gay and lesbian cases which was really often said by Jude's mother who was British. It can also be seen that Beckham plays a very important role in football and that it really brings the sense of British of British people and their culture as soon as we see football or Beckham, this symbolises Britain in 2003. ...read more.