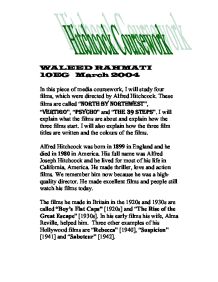 In this piece of media coursework, I will study four films, which were directed by Alfred Hitchcock.

WALEED RAHMATI 10EG March 2004 In this piece of media coursework, I will study four films, which were directed by Alfred Hitchcock. These films are called "North by Northwest", "Vertigo", "Psycho" and "The 39 Steps". I will explain what the films are about and explain how the three films start. I will also explain how the three film titles are written and the colours of the films. Alfred Hitchcock was born in 1899 in England and he died in 1980 in America. His full name was Alfred Joseph Hitchcock and he lived for most of his life in California, America. He made thriller, love and action films. We remember him now because he was a high-quality director. He made excellent films and people still watch his films today. The films he made in Britain in the 1920s and 1930s are called "Boy's Flat Caps" [1920s] and "The Rise of the Great Escape" [1930s]. In his early films his wife, Alma Reville, helped him. Three other examples of his Hollywood films are "Rebecca" [1940], "Suspicion" [1941] and "Saboteur" [1942]. ...read more.

Hitchcock uses close up shots on the man when he sees a car. Another scene where camera angles and sounds are used well is when Roger Thornhill is in the middle of nowhere, where dead crops were growing. This is called the 'crop dusting scene' in the film. The man is waiting for someone called Victor Caplan. When he sees a plane he thinks Caplan is in it, coming to see him but it later appears that the plane is trying to kill him. The camera angles at the beginning are high and long shots. The sounds we hear at the beginning of the scene are just car noises. We do not hear anything else afterwards for a while. Then we hear a plane noise which gets louder and louder. We hear the music when the plane crashes into with the truck to make the film exciting to the audience. The second film we watched was called "Vertigo", which means fear of heights. I think the film is going to be about a man who is scared of heights. ...read more.

Memory, a boozing man. There is a more humour in the train when the man shows the bra to the Vicar. We know that the film is a thriller as the woman gets killed in the first ten minutes. The mood of the music hall audience is lively. The men are drinking, and then a fight breaks out. The mood is funny. The camera does not focus on Hannay's face but on the back of his head. This creates mystery in the man. There is no music at the tense moment, when the woman dies. We only hear the sound of the curtains flapping in the wind. We do not hear any music when this murder happens; it is silent. The sound of the train's whistle is a woman's scream. There are two close up shots. The first one is when we see the knife in the woman's back and another close up shot is when we see a man's eyes in the train but we do not know what he is thinking. Hitchcock is a very good director; he uses music and camera shots to make his films exciting for the audience. Most of his films are action, mystery and thrillers. ...read more.