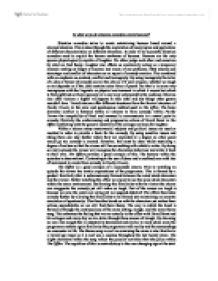 In what ways do situation comedies create humour?

In what ways do situation comedies create humour? Situation comedies strive to create entertaining humour based around a relevant situation. This is done through the exploration of many topics and application of different characteristics on different characters. In order to be successful situation comedies need to exploit the human weakness of humour. Humans are the only species physiologically capable of laughter. We often judge each other and ourselves by what we find funny. Laughter also affects us emotionally acting as a temporary amnesia making us forget or become less aware of our problems. Most sitcoms use stereotype and conflict of characters as an aspect of comedy creation. This combined with an emphasis on contrast, conflict and incongruity. By using incongruity the teller of a joke or former of comedy can tell the joke as if it were original, whether we laugh or not depends on if the joke contains some form of punch line that is in some way incongruous with the linguistic or physical environment in which it occurs but which at first sight had not been apparent or in any way anticipated by the audience. Sitcoms also offer viewers a higher willingness to take risks and say things other genres wouldn't dare. Varied sitcoms offer different structures from the farcical structure of Fawlty Towers to the slow and spontaneous method used in The office. ...read more.

This is because at several points in an episode the characters are aware of the camera, this becomes apparent by an occasional meeting of a characters eyes and the camera. The producers also incorporate the use of "Cutaways" that withdraw from the office scene and interrupt a staged interview of one of the characters. The similarity of this to a documentary gives the impression that in the same way a documentary explores and studies a topic, The Office studies the office area yet can find nothing of interest due to the boring area that the office is. This is enhanced by the motionless and the same airless atmosphere of the camera. This is achieved through the use of the hand held camera when filming, such as the sound of the air as the camera moves; this all adds to the fake realism that The Office strives to create. The filming also uses close-ups, zooms and pulls in the same way an amateur home video would. The sound used in each episode includes background noise such as clatters and the shuffling of shoes, noises that would normally be edited out. This adds to the creation of comedy by projecting the incongruence and separating The Office in its comedy from other sitcoms. The comedy is based around a central figure that is David Brent. ...read more.

In conclusion, in order to create humour in a relevant and recognisable situation a sitcom must use a structured set that allows a viewer to familiarise themselves with the stock characters and form a relationship with the program. Through the use of incongruent characters that can seriously explore stereotypical topics comedy is formed. This is because we see more about the characters than they themselves now. By stretching the racial content to the limit we the viewers are preoccupied by the comedy that they form by saying such unexpected things that we do not concentrate on the serious side although in order to be acceptable each sitcom must yield a point of sanity and sensibility. The basic structure for humour pivots between the clash of hopes and characters. Most sitcoms adopt a circular structure where the main generator of comedy is the lack of progression having witnessed a gradual build up and a sudden deflation. The sitcoms capability to use such spontaneity depends upon other elements that provide it with the grounds to push the boundaries, by having a sensible and basic setting and theme tune the sitcom is already based within a realistic and perfectly possible area leaving no limit to the realism of the acting. The delicate generic classing of sitcoms allows it to either mock or in list the aid of other genres and still be within the in expendable boundaries of comedy. Hasan Al- hasani ...read more.