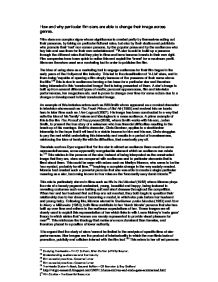 How and why particular film stars are able to change their image across genres. 'Film stars are complex signs whose significance is created partly by themselves acting out their personas, by taking on particular fictional roles, but also by their studios and publicists who promote their 'real' non screen persona, by the popular press and by the audiences who buy into and use them for their own entertainment.' [1]A star is said to build up a persona through the different roles that they play in films and have become brands in their own right. Film companies have been quick to notice this and exploit the 'brand' for a maximum profit. Stars are therefore used as a marketing tool in order to publicise the film. The idea of using stars as a marketing tool to engage audiences for their film began in the early years of the Hollywood film industry. This led to the classification of 'A-List' stars, and to them being 'capable of opening a film simply because of the presence of their name above the title.'[2] This is due to audiences forming a fan base for a particular star and therefore being interested in this 'constructed image' that is being presented of them. A star's image is built up from several different types of media; personal appearances, film and television performances, fan magazines etc. and is prone to change over time for some actors due to a change or development in their constructed image. An example of this includes actors such as Will Smith whom appeared as a comical character in television shows such as The Fresh Prince of Bel-Air (1990) ...read more.

Although Carey was used as a successful marketing tool, by the use of his name above the title, in order to attract audience to watch the film, the role was unsatisfying due to the lack of his character persona and humour presented. Intertextual references were taken from films such as Liar Liar, where the character of Carey used phrases such as 'I rest my case your honour'[10]. Here, Carey shows little emotion and uses the phrase in a simple, monotone sentence. In Liar Liar, contrastingly, Carey is over enthusiastic about winning his case that he results to leaping onto a table. It is almost as if the audience is waiting to see Carey react in this same manner, leading to disappointment. However, the storyline of the film was intriguing for the audience that partly compensates for Carey's acting, however, it is clear that Carey is out of place within this genre. It could be considered that Carey is unsuccessful due to his status. After spending over 20 years in the film industry building up the image of a comedian it was an enormous change to then star in a suspense / thriller and try to play a very serious role. It has been stated that 'the casting of a particular actor has important on the effect the characterization will have'.[11] As we can see from films such as Ace Ventura and Fun With d**k and Jane, Carey's role has adapted slightly into a more romantic comedy with successful characterisation, therefore showing that it is possible for a role to be adapted, but it could be argued that there is a limit to how far before the casting becomes out of context. ...read more.

they play; they stay broadly the same in order to enhance recognition.'[16] This can still be proven true with Julia Roberts as elements of her being portrayed as a s*x symbol remain present; she has simply matured and become more sophisticated. Her lowered social status is also present due to her working for a male lawyer that continually dominates the case she is building. It has been suggested that 'the star can change meaning over time,'[17] however, there is little theories stating that a star is able to change their image entirely. From looking at box office figures of the top ranking star it can be seen that with the 2005 figures, Jim Carey ranked 10th and Julia Roberts 14th, [18] however, by 2009, after the release of The Number 23, Julia Roberts ranked 10th, Jim Carey 14th and Brad Pitt 29th[19] therefore proving that Carey was unable to alter his star persona, yet Roberts' overall success increased after her adaption to her persona. Biography: http://www.youtube.com/watch?v=ER7ZrOvxEpo&feature=related - Jim Carey on David letterman 12/19/05 Part 1 http://www.boxofficemojo.com/movies/?id=prettywoman.htm - Pretty woman box office [1] Studying the Media - Tim O' Sullivan, Brian Dutton & Phillip Rayner. [2] Understanding audiences and the industry [3] Film as social practice - Graeme Turner [4] Film as social practice - Graeme Turner [5] The Media Student's Book, Second Edition - Gill Branston & Roy Stafford [6] http://virgin-research.blogspot.com/2007/12/laura-mulvey-and-male-gaze-summarised.html [7] Film Studies - The Essential Resource [8] http://www.marilynfineart.com/storyv2.html1 [8] http://en.wikipedia.org/wiki/Jim_Carrey#Film_career [9] [10] Liar Liar - DVD [11] Film as social practice - film audiences [10] [11] [12] [13] Understanding Audiences and the Film Industry [16] Studying the media - Tim O'Sullivan, Brian Dutton, Phillip Rayner [17] [18] Film Studies: The essential resource [19] http://www.boxofficemojo.com/people/?view=Actor&sort=sumgross&p=.htm ?? ?? ?? ?? ...read more.