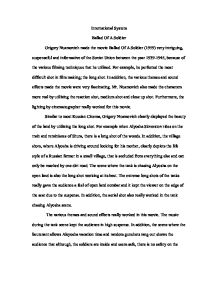 International System Ballad Of A Soldier Grigory Nuamovich made the movie Ballad Of A Soldier (1959) very intriguing, suspenseful and informative of the Soviet Union between the year 1939-1945, because of the various filming techniques that he utilized. For example, he perfected the most difficult shot in film making; the long shot. In addition, the various themes and sound effects made the movie were very fascinating. Mr. Nuamovich also made the characters more real by utilizing the reaction shot, medium shot and close up shot. Furthermore, the lighting by cinematographer really worked for this movie. Similar to most Russian Cinema, Grigory Nuamovich clearly displayed the beauty of the land by utilizing the long shot. For example when Alyosha Skvorstov rides on the train and reminisces of Shura, there is a long shot of the woods. In addition, the village shots, where Alyosha is driving around looking for his mother, clearly depicts the life style of a Russian farmer in a small village, that is secluded from everything else and can only be reached by one dirt road. ...read more.

The cinematographer also did a wonderful job in using lights and darks inside the train cart. For example, in the scene where Shura fell asleep, the cart was dark; however her face had a spotlight. In addition, the whole time that Alyosha and Shura are in the train wagon its dark, however most of the time they have a spotlight on their face. Another example, of the cinematographer's excellent work is when Shura is chasing the train that Alyosha is on and he is trying to give her his address. I really enjoyed Ballad Of A Soldier because not only is it thrilling and intriguing, because of the various filming techniques that Grigory Nuamovich used, but it also show's the beauty of the land and the mindset of the Russian people during that time period. Everyone worried about their kids and loved ones on the battle field. In addition, the train scene in which Alyosha was riding with his comrades shows Russian hummer at its best. (Hard to explain) Furthermore, the scene in which the fat soldier that lets Alyosha on the train really shows how soldiers abuse their authority during the war. ...read more.