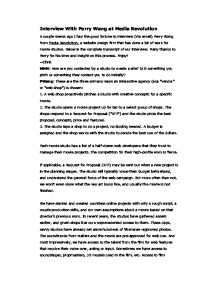 Interview With Perry w**g at Media Revolution A couple weeks ago I had the good fortune to interview (via email) Perry w**g from Media Revolution, a website design firm that has done a bit of work for movie studios. Below is the complete transcript of our interview. Many thanks to Perry for his time and insight on this process. Enjoy! --Chris MMM: How are you contacted by a studio to create a site? Is it something you pitch or something they contact you to do initially? PWang: These are the three primary ways an interactive agency (aka "vendor" or "web shop") is chosen: 1. A web shop proactively pitches a studio with creative concepts for a specific movie. 2. The studio opens a movie project up for bid to a select group of shops. The shops respond to a Request for Proposal ("RFP") and the studio picks the best proposal, concepts, price and features. 3. The studio taps a shop to do a project, no bidding needed. A budget is assigned and the shop works with the studio to decide the best use of the dollars. Each movie studio has a list of a half-dozen web developers that they trust to manage their movie projects. The competition for their high-profile work is fierce. If applicable, a Request for Proposal (RFP) may be sent out when a new project is in the planning stages. The studio will typically know their budget beforehand, and understand the general focus of the web campaign. But more often than not, we won't even know what the key art looks like, and usually the movie is not finished. We have started and created countless online projects with only a rough script, a couple production stills, and our own assumptions about a movie based on that director's previous work. In recent years, the studios have gathered assets earlier, and given shops like ours unprecedented access to them. ...read more.

These come with their own built-in fan bases that really don't require much monetary expenditure. All that's needed to get this more or less guaranteed audience in the theaters is to: 1) Let a half-dozen influential websites know the movie is being made. 2) Keep feeding those sites exclusive poster art, production stills and other goodies. 3) Sit back and let the bloggers and second-tier sites spread the news. Once that cycle kicks into gear they're set and people will be salivating by the time opening day arrives. Then you release a commercial to television about two weeks prior to opening in order to alert any stragglers and/or common folk that this might be worth $10 each on a Saturday night. Licensing This goes hand in hand with the point above on increasing production resources being geared toward existing properties. Why should Fox spend, say, $10,000 on a television campaign when they can get General Mills to put a picture of The Thing on a box of Cheerios for $20,000? They just increased their message's reach by 1,000% for a monetary outlay of only twice as much. (All these numbers and scenarios are hypothetical by the way.) With licensing the partner company is also then footing some if not all of the bill. They are getting advertising out of the agreement that they are paying for. It's a mutually beneficial relationship and one that drives down costs for both players involved. Theater-to-DVD Window Closing There's no denying that the window of time between a theatrical opening and its DVD release is getting smaller and smaller. (I'm excluding the recent National Lampoon's Blackball which had a four-day window.) This is because that's where the real money is. Why promote the theatrical release (where only one-in-ten movies makes money) when home video (when four-in-ten movies start making money) is coming so soon? The ever-shrinking window means that when a studio launches a campaign for the DVD it's still in the midst of a theatrical release, increasing the bang for that advertising dollar. ...read more.

This guarantee is an interesting effort to drum up business, particularly because the demographic most receptive to these types of offers is also the same one most likely to be interested in seeing this film. And much like rebates, the redemption levels are, barring aberrations, usually pretty low. AMC isn't releasing any numbers, and so far has just said that the refunds requested have been "minuscule." Paramount Launches Film Website Targeting Playstation Portable Users Posted on Monday October 10, 2005 Filed under 18-35 Males, Drama, Mobile Video, New Releases, Online Marketing, Paramount Paramount Pictures Interactive Marketing has announced the launch of the first movie website targeted at PlayStation Portable users. The special site is for the upcoming 'Get Rich or Die Tryin', a hip-hop themed film starring "50 cent" and directed by Academy Award-nominated director Jim Sheridan. The site, launching at http://www.50psp.com, has been designed to to take advantage of PSP's screen size and surfing capabilities. Media featured on the site the will include PSP trailers, wallpapers, webisodes, and photos that PSP users can download directly to their PSP devices. Commenting on the selection of this particular film, Amy Powell, vice president of Interactive Marketing for Paramount Pictures commented that "'Get Rich or Die Tryin'' is a perfect match for the first PSP-exclusive movie site; the PSP is huge in the hip-hop community and 50's fans are avid PSP users." In analyzing the site, it looks like the design philosophy in creating websites for the PSP follows much of the same principles as designing for other various handhelds -- basically, you need to strip out all of the excess coding and shoehorn the content into a 480 pixel-wide screen. If you're looking to hire a developer to design a site that will work with the PSP, be sure they're familiar with crafting sites that work for the NetFront browser, which now comes standard with the PlayStation Portable 2.0 Operating System. You can also visit this link for some basic design guidelines. ...read more.