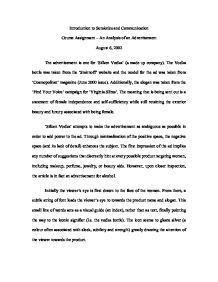 Introduction to Semiotics and Communication - An Analysis of an Advertisement

Introduction to Semiotics and Communication Course Assignment - An Analysis of an Advertisement August 6, 2002 The advertisement is one for 'Silken Vodka' (a made up company). The Vodka bottle was taken from the 'Smirnoff' website and the model for the ad was taken from 'Cosmopolitan' magazine (June 2000 issue). Additionally, the slogan was taken from the 'Find Your Voice' campaign for 'Virginia Slims'. The meaning that is being sent out is a statement of female independence and self-sufficiency while still retaining the exterior beauty and luxury associated with being female. 'Silken Vodka' attempts to make the advertisement as ambiguous as possible in order to add power to the ad. Through minimalization of the positive space, the negative space (and its lack of detail) enhances the subject. The first impression of the ad implies any number of suggestions that discreetly hint at every possible product targeting women, including makeup, perfume, jewelry, or beauty aids. However, upon closer inspection, the article is in fact an advertisement for alcohol. Initially the viewer's eye is first drawn to the face of the women. From there, a subtle string of font leads the viewer's eye to towards the product name and slogan. This small line of words acts as a visual guide (an index), rather than as text, finally pointing the way to the iconic signifier (i.e. ...read more.

When one loses his/her voice, it means that he/she can no longer speak his/her thoughts. Conversely, when one finds his voice, he can then articulate his position. The concept of speaking one's mind has been assimilated into the empowerment of a group subject to oppression. Freedom of speech has always been a merit of the North American lifestyle, and actively utilizing this right makes one a patriot. The slogan actively plays on this ideology of speaking out and voicing one's opinions. In keeping with the revolutionary theme, one would expect that the font of this message would be bold and dramatic. However, in this advertisement, it is written in swirly, childish front, which shows signs of playfulness. Furthermore, the color of the font is printed in white, which symbolically denotes purity and cleanliness. Through this methodical subversion, the text can be reinterpreted as "seemingly innocent", which contradicts the original meaning of the text. The brand name of the product is can also been seen as iconic. The word silken refers to a smooth texture which can be interpreted by the viewer that like the silk one many find in clothing, Silken Vodka, by comparison, is just as smooth when it as it goes down the throat. Other factors will further reinforce the 'silken' quality of the vodka such as the kinesics and physical features of the model which will be discussed later on in the essay. ...read more.

The diamond earring located on her lobe is the ultimate contradiction to a woman's independence. While it can be expected that a woman would select her own ensemble, the diamond earring surfaces the popular "romance myth", which implies a significant other who may have purchased them for her at some point. The implication of traditional romance is one of the foundations of a society. However, it is also one that generally dictates that women will be married and consequently, lose their autonomy. Additionally, the use of red, shiny lip gloss on the model reinforces the feminine quality she possesses. It shows that despite the empowered and autonomous attitude she retains, she still has a need to be beautiful and the eyes of society. Both these characteristics show the femininity of the model contradicting the original underlying message of the text. To conclude, the ad suggests that Silken Vodka is a definitive stepping stone in becoming the autonomous "superwoman", who despite her androgynous merits, succeeds in maintaining her femininity. Even though the act of alcohol consumption is clearly defined by its social use, it also entails the statement of female independence which does not require that you give up "pretty" clothes, makeup, or even extravagant gifts from a male admirer. The new aged woman is more independent, calling her own shots, and choosing to consume a drink made especially for women. Silken Vodka is offering a possible female identity, albeit an impossible one. ...read more.