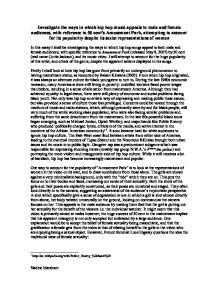 Investigate the ways in which hip hop music appeals to male and female audiences, with reference to 50 cent's Amusement Park, attempting to account for its popularity despite its s****t representations of women

Investigate the ways in which hip hop music appeals to male and female audiences, with reference to 50 cent's Amusement Park, attempting to account for its popularity despite its s****t representations of women In this essay I shall be investigating the ways in which hip hop songs appeal to both male and female audiences, with specific reference to Amusement Park (released May 8, 2007) by 50 cent (real name Curtis Jackson), and its music video. I will attempt to account for the huge popularity of this artist, and others of the genre, despite the apparent sexism displayed in his songs. Firstly I shall look at how hip hop has gone from primarily an underground phenomenon to having mainstream status, as recounted by Bakari Kitwana (2005). From when hip hop originated, it was always an alternate culture for black youngsters to turn to. During the late 1980s economic recession, many Americans were still living in poverty: unskilled workers faced poorer wages than before, resulting in a sense of alienation from mainstream America. Although they had achieved equality in legal status, there were still plenty of economic and social problems facing black youth. Not only was hip hop an artistic way of expressing and making public these issues, but also provided a sense of culture those less privileged. Concerns could be voiced through the medium of music and radio stations, which, although primarily were by and for black people, still very much of the white working class population, who were also facing similar problems and suffering from the same detachment from the mainstream. In the late 80s powerful black icons began emerging, such as Michael Jordan, Oprah Winfrey, and major bands like Public Enemy who produced 'politically charged lyrics, criticism of the media, and active interest in the concerns of the African American community'1. It soon became hard for white audiences to ignore hip hop culture. ...read more.

Although it is interesting to note that no accurate source has been cited for this statistic, hip hop is undeniably a prominent part of mainstream white music culture. Before, when the genre was a political move as much as it was a music genre, a chance for black underprivileged youth to voice their concerns for the culture, it was something that both black and white people could understand in relation to their own lives. The current state of hip hop is that we 'look through the keyhole into a violent, sexy world of "money, ho's and clothes"' as described by Justin Ross (2007). This may be an accurate description of the way that audiences perceive such videos, given that 50 cent's music refers to neither the real problems, past or present, of black culture, nor to the life which Curtis leads. It would also account for the general acceptance of these representations, if the audience is distanced from what is shown in the videos: issues of sexism and violence are far less relevant outside black urban society and it is therefore easier for a white consumer to take the videos solely as entertainment. It is also important to remember that while the majority of hip hop artists are black, it is predominantly marketed and controlled by a white industry, as Bakari describes (p46) in which the importance of an authentic representation of black culture is of little importance compared with supplying the public with texts which they will buy in to, as evidently the s*x appeal of the videos is an important aspect. The next thing I shall look at is the level of awareness of the sexism in both the video itself, and the audience it is aimed at. There are many shots which suggest that the images in it, and the lyrics, are not entirely sincere. This is evident in the shots of the girl sitting on a bench next to 50 cent. ...read more.

In all aspects of the media girls are presented, more than anything, by their sexuality and appearance, which can be found in adverts in women's magazines, stereotypes in film and television (a notable example being Desperate Housewives), car adverts, drink adverts. Although elevated within the genre, this representation could be described as a reflection of attitudes prevalent in both the media and in society and therefore not so shocking to audiences. Another issue described by an internet blogger9 is that by shutting sexism and violence portrayed in hip hop music, it is shutting off a fundamental way of keeping these issues in the eye of the public. He quotes that the leading killer of African Americans is homicide; and that males are five times more likely to be killed than their white counterparts. These issues will still exist even in the absence of offensive hip hop. While this certainly an interesting point, hip hop paradoxically glorifies the very things which it makes an issue of. While artists like 50 Cent may primarily be driven by selling as many records as possible, he still in one sense continues to represent issues which would otherwise be forgotten, if only in a postmodern way. Therefore, in order for hip hop to serve this purpose, it is essential that audiences neither directly embrace the values shown in the videos, nor take it as purely entertainment, as Amusement Park evidently does allow us to do. However, audiences could be said to be becoming increasingly desensitised to these things, with violent films and video games and the huge availability of p*********y through the internet, which would make this reading more difficult to achieve. Whether or not the sexism and violence in hip hop is justified or not, if audiences were to take a more active role in their media, it would simultaneously prevent potential influence from such songs, and also make thorny issues in black society more accessible to deal with. ...read more.