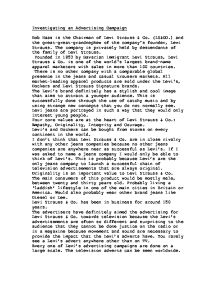 Investigating an Advertising Campaign Bob Haas is the Chairman of Levi Strauss & Co. (LS&CO.) and the great-great-grandnephew of the company's founder, Levi Strauss. The company is privately held by descendants of the family of Levi Strauss. Founded in 1853 by Bavarian immigrant Levi Strauss, Levi Strauss & Co. is one of the world's largest brand-name apparel marketers with sales in more than 100 countries. There is no other company with a comparable global presence in the jeans and casual trousers markets. All market-leading apparel products are sold under the Levi's, Dockers and Levi Strauss Signature brands. The Levi's brand definitely has a stylish and cool image that aims to attract a younger audience. ...read more.

Originality is an important value to Levi Strauss & Co. The main consumers of this product would be mostly male, between twenty and thirty years old. Probably living a 'laddish' lifestyle in one of the main cities in Britain or America. Would also probably wear other brand jeans like Diesel or Lee. Levi Strauss & Co. has been in business for around 150 years. The advertisers have definitely aimed the advertising for Levi Strauss & Co. towards television because the Levi's advertisements are often so different and surprising to the audience that they cannot be done justice on the radio or in a magazine because movement and sound are necessary to provide the impact that the Levi's adverts have. ...read more.

By using the kind of music that the target audience would like then the target audience will feel that Levi's is something they want to be a part of. Music is also a very important strategy used in the 'Flat Eric' advertisements. The music that is used will be popular with the target audience but humour is also used through the stuffed toy that nods its head to the music. If you watch an advert that makes you laugh then you become interested in it and want to see it again. I think that humour is a good way of successfully attracting a target audience. I think that Levi Strauss & Co. have continued one of their values of originality through their television advertisements. The Levi advertisements are definitely original every time and are like no other adverts you see on television. ...read more.