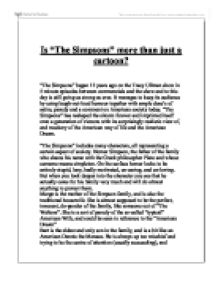 Is "The Simpsons" more than just a cartoon? "The Simpsons" began 12 years ago on the Tracy Ullman show in 5 minute episodes between commercials and the show and to this day is still going as strong as ever. It manages to keep its audience by using laugh-out-loud humour together with ample dose's of satire, parody and a comment on American society today. "The Simpsons" has reshaped the sitcom forever and imprinted itself onto a generation of viewers with its surprisingly realistic view of, and mockery of the American way of life and the American Dream. "The Simpsons" includes many characters, all representing a certain aspect of society. Homer Simpson, the father of the family who shares his name with the Greek philosopher Plato and whose surname means simpleton. On the surface homer looks to be entirely stupid, lazy, badly motivated, un-caring, and un-loving. But when you look deeper into the character you see that he actually cares for his family very much and will do almost anything to protect them. ...read more.

Bart isn't very bright at school, and doesn't seem to care. Lisa is another idealistic character, and is almost the exact opposite of Bart. She is vastly intelligent, charitable and caring. She has adult views on many aspects of life. At school she finds the work she is given very easy, but the teachers refuse to give her the challenge she thinks that she needs in a school system unable to cope with her intelligence. Maggie is a 6 month old baby girl communicating only through the odd "suck-suck" on her dummy (albeit quite effectively). She never speaks, cries, changes her facial expression and has had more experiences from her life than the normal adult. The characters in "The Simpsons" are very believable because none are truly perfect, all have imperfections. The imperfections the characters have bring the American dream down to more attainable standards than it is made out to be. In the past family sitcoms portrayed people as they never could be. ...read more.

Ned gives children sweets in detention and teachers stop working altogether. Ned's career is finished when he reads a prayer out over the intercom to the school. Showing how people in America are wary of causing offence. In many other episodes including "Cape Feare" the Police force is always made fun of. Police Chief Wiggum is a fat, lazy, doughnut eating man who never really seems to care much about enforcing the law. He doesn't seem to know the law himself and makes many errors in his work, like letting prisoners go free, accepting bribes and using an answering machine to take emergency calls. In the End I think that "The Simpsons" is much more than a cartoon because it points out so many things that are wrong with today's society. By mocking itself and parodying other media works it shows that a lot of television is far too idealistic. It also points out problems with the way society is run, with the education system, police force and government always being made fun of. Because the writers make us laugh at these problems it helps to understand them more than it would if we just sat there feeling all depressed. ...read more.